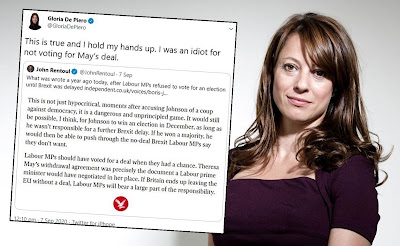 Ex-Labour MP Gloria De Piero has expressed regret that she did not back Theresa May's Brexit deal last year.  With a no deal exit drawing closer, the former Ashfield MP said she 'was an idiot' for not backing it.  She concurred with The Independent's John Rentoul, who tweeted a piece he wrote last year that predicted a December election that Boris could win - ultimately leading to the no deal Brexit Labour MPs were so vehemently against. 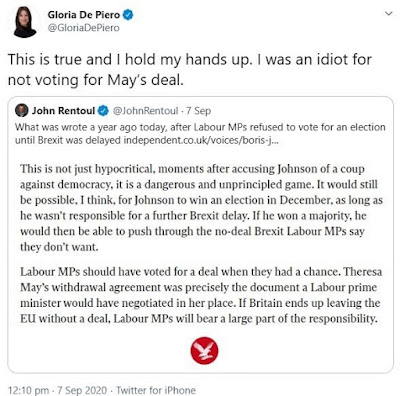 While the overwhelming majority of her colleagues blocked Brexit at every turn last year, De Piero increasingly softened her stance as the year progressed.  Her Nottinghamshire constituency backed Leave in a big way (70 per cent), but despite her opposition to a second referendum she chose to stand down rather than defend her seat.  It was a good call as Ashfield fell to the Tories and Labour crashed to third.
It's highly doubtful that De Piero's colleagues (especially those who survived December the 12th) will be so forthright in bearing responsibility for the dreaded no deal they spent so long telling us would be catastrophic.
at September 10, 2020