If Manchester United striker Marcus Rashford was approaching retirement one would strongly suspect he was angling for a career in politics.  However, the lad is just 22 and will surely be able to enjoy another decade or more at the top of his game.  His campaign to end child poverty is laudable, except precisely what child poverty is in the Western world is open to interpretation.  The word poverty conjures up images of starving Third World children drinking filthy water from a ditch, for whom luxuries such as smart phones or even an education is a pipe dream.  Here in the West, some charities and activists regard a family without access to wi-fi as living in 'poverty'.

Marcus has a solution and it's in the old socialist tradition of state provision.  After forcing our woefully weak Tory government into a u-turn on free school meals, he's back in the news again this week after merely passing comment on an MP's tweet.  Tory MP Kevin Hollinrake, who represents an affluent rural constituency in North Yorkshire, had the audacity to suggest that it's a parent's responsibility to feed their children - not the government's (see thread below). 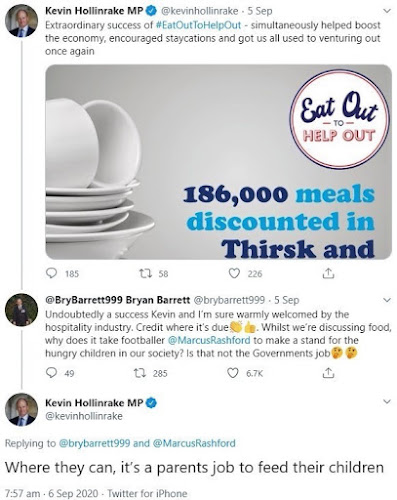 Despite Hollinrake having preambled his comment with 'where they can', the mainstream media took little time in jumping on his case and praising Rashford for his response (see below).  On her morning show yesterday, Lorraine Kelly even remarked 'good on him' in reference to Rashford. 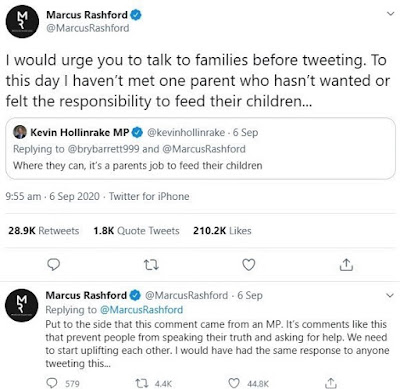 Despite his age, Rashford knows how to play more than just football.  He has the media eating out of his hands and he has a huge social media following of almost three and a half million.  Tory MPs can hope to muster a few thousand by comparison, but they are the legislators in this country and they are elected by the people.  No-one begrudges someone the right to an opinion, but when they are repeatedly put on a pedestal by supposedly non-partisan broadcast media to lecture the masses, impartiality has clearly been put to one side.

A colleague of Hollinrake was among those who responded to Rashford, but alas the media were not interested in any reasoned criticism of their golden boy.  Mansfield MP Ben Bradley made a very valid point that the offsetting of personal responsibility in favour of the nanny state is no solution to anything.  Sadly, we now have a mainstream media that despises libertarian values, freedom of speech and individualism.  Socialism was supposed to have been killed off on December the 12th, but the BBC, ITV and Sky have not got that memo. 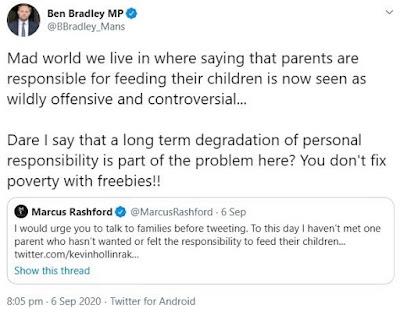