MP HITS BACK OVER LABOUR AD

The Tory MP for Ashfield in Nottinghamshire has hit back over a Facebook advert distributed by Labour.  The advert incorrectly states that Lee Anderson 'voted to end furlough', but there was no such vote in Parliament - furlough was scheduled to end next month, a decision made by the Chancellor way back in May.  Ashfield was one of the red wall seats Labour lost in December and they are seemingly desperate to smear their way back into contention for the next election.  Embarrassingly, whoever posted the ad couldn't even be bothered to spell 'Ashfield' correctly (see below). 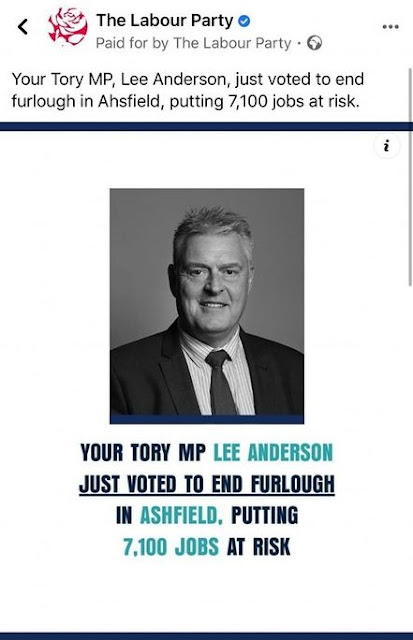 "Furlough Facts.
The Labour Party have sponsored an advert targeting people in Ashfield to state I voted to end furlough payments in Ashfield.  More fake news.  Furlough was initially intended for 3 months then Govt decided to carry it on for another 3 months.
In Ashfield alone it means that over £60 million pound in furlough and self employed grants has been paid out.  Nearly 20 million in support grants and tens of millions in bounce back loans.
Remember there is no such thing as Government money, this is your money and we all have to pay it back somehow.
We are now investing in the Kickstarter scheme for young people to find work and the job retention scheme.
I was in the chamber during the debate when Labour were asked time and time again 'How long should furlough be extended by?'  Not one answered.
Finally look at the screenshot from the Labour Facebook page - they cannot even spell Ashfield correctly".

Anderson will be one of the hardest MPs for Labour to dislodge in 2024, particularly as he knows a thing or two about his red foe.  Up until March 2018 he was a Labour councillor and actually worked for Ashfield's incumbent MP - Gloria De Piero.  He's an ardent Brexiteer and recently invited Labour Remainer Neil Coyle to travel up to the Midlands and explain his anti-Brexit social media outburst.

Anderson also spoke up for the government's Internal Market Bill during Monday's debate, taking aim at the Labour benches and accusing them of ignoring the views of ordinary people in favour of 'their mates in the tea room reading The Guardian'.  How true.