On Friday we finally received an update from Twitter on our appeal.  It had been over four weeks since they blocked Richey from accessing the account over a tweet that Twitter claimed was 'abusive'.  Richey was responding to someone who said that a man who defaced a BLM mural should have had his neck knelt on by the police.  A black woman had also defaced the same mural in a separate attack and Richey merely asked: "Should they have knelt on her neck too?"
So one tweet promotes violence while another asks if it is acceptable to apply said violence in other circumstances.  The former remains, while ours results in a block.  Twitter have now confirmed in an email (see below) that our appeal has been rejected as Richey's tweet violated Twitter's rules on 'abusive behaviour'.  Richey's tweet asked a question of someone who wanted police to kneel on someone's neck, that's all. 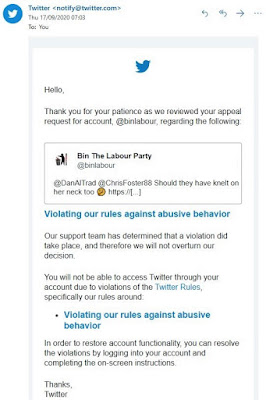 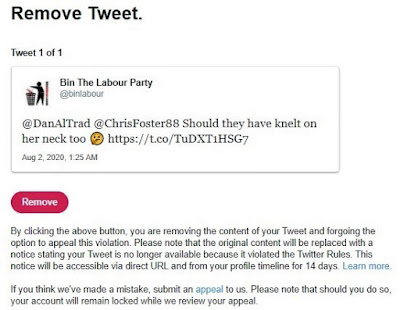 Richey will not be clicking the remove button just yet and he will continue to use Parler for the time being (our user name is Binlabour).
This sorry escapade once again exposes the double standards of woke Twitter.  Incidentally, the official Twitter profile page continues to sport its BLM tags and imagery.  Their agenda is clear for all to see.
at September 20, 2020