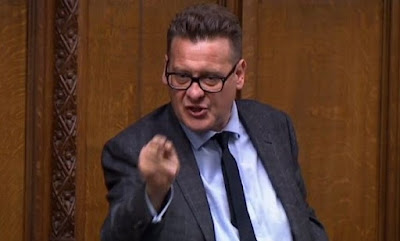 Labour frontbencher Karl Turner has quickly deleted a tweet in which he used the hashtag #ToriesKilledYourGranny.  The Hull East MP was responding to a tweet by Tory health minister Nadine Dorries in which she implored younger people to protect their elderly relatives from the resurgent coronavirus: "We know that a rise in the younger age groups will transfer across to those who are more at risk and vulnerable. Keep your Nan and grandad safe".

Turner replied: "How many granny's died needlessly in care homes, Nadine? #ToriesKilledyourGranny".  Dorries herself had a brush with the virus back in March, as did her 84-year-old mother, who thankfully survived.  Perhaps with this in mind, Turner deleted his tweet after just four minutes.

Unfortunately for him it was already too late.  If a tweet isn't screen-grabbed prior to deletion it is still automatically registered on the website Politwoops (see below).

As is the case with so many controversial tweets by MPs, Turner's came late at night - 23:37 on Monday - so could have potentially been alcohol-induced.  He certainly has form when it comes to regretful tweets, having deleted a whopping 5,451 according to Politwoops.  By comparison Nadine Dorries has deleted 1,745.

Turner may well have had another good reason for deleting this latest tweet.  Twelve months ago Westminster was gripped by angry scenes over the Brexit impasse with furious outbursts from Labour MPs such as Paula Sheriff and Barry Sheerman.  They were angry about 'inflammatory' language being used by the Prime Minister, primarily his use of the term 'surrender' in relation to Brexit-blocking legislation.  Karl Turner later confronted Dominic Cummings and accused him directly of being behind the PM's 'appalling tone of language'.  This coming from the man who now describes Tories as 'granny killers'.