A Tory MP has invited Labour's Neil Coyle to come and explain his recent remarks about Brexiteers to Leave voters in his Midlands constituency.  Lee Anderson wrote to the London MP and dared him to travel north and visit a working man's club in the former coal mining communities of Ashfield, Nottinghamshire.  Here he could meet some ex-Labour voters and discuss how Labour were going to win them back, albeit Anderson seemed fairly confident Coyle would fail - as if the keyboard warrior would ever agree to it in the first place... 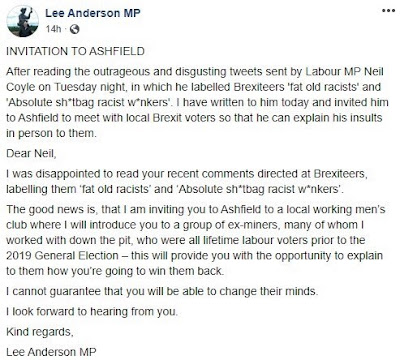 In 2016 Ashfield had returned one of the strongest Leave votes in the country with 70 per cent backing Brexit.  At this point it had been a Labour seat since 1979, when the Tories lost the seat following a stunning by-election win two years earlier.  Until 2019 those two years were the only period a Tory had represented the seat in its 64 year history.

The road to victory for the Tories began in 2017 when the huge UKIP vote from 2015 crashed and the Tory vote doubled.  Two years later the sitting Labour MP - Gloria De Piero - knew she was finished and stood down rather than defend her seat.  It was perhaps a wise move as the Labour vote plummeted by more than 9,000 votes in 2019, handing victory to the Tories.  Anderson won Ashfield despite a 1,600 vote decline in the Tory vote.

Labour will find it particularly hard to regain this seat in four year's time, primarily because of Anderson himself.  Lee Anderson is not a typical Tory, in fact just nineteen months prior to the 2019 election he was a Labour councillor.  He was one of two Ashfield Labour councillors to defect to the Tories in March 2018, both of whom cited the influence of the hard left and Momentum as the main factor behind their decision.  It was a bold move to install such a long-standing former Labour activist as their candidate, but the ardent Brexiteer was just the kind of candidate that Boris Johnson needed to get Brexit done.  And unlike so many other MPs who were parachuted into constituencies around the country, Lee is a local lad and he got his hands dirty in the coal mines.

As for Neil Coyle, he deleted his abusive tweets on Thursday and apologised (see below).  Clearly he'd received a phone call from Sir Keir and a reminder that the message was now that Labour was no longer ashamed to be patriotic.  Too little, too late - the cat was already out of the bag.  It's clear that the metropolitan elites who dominate the modern Labour Party - whether that be privately-educated centrists like Coyle or privately-educated leftists like Nadia Whittome - are no different from those who run the Brit-hating BBC. 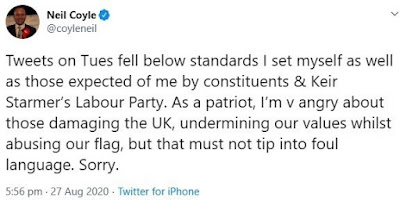 Coyle's assertion that he is a 'patriot' is laughable and insulting in equal measure, but perhaps it's Lee Anderson who summed him up best earlier this week: "They say a drunk man is a sober man talking.  He must have had a skinful last night".
at August 28, 2020