Keir Starmer has been very critical of the government over the last week in relation to the A-levels controversy.  Half a dozen attack videos have been put out via his social media accounts and he has persistently used the words 'fiasco' and 'incompetence'.  Strangely, his many messages have not been passed on by Welsh Labour MPs.  Why?  Because they are fully aware that the Labour-led Welsh government used the same algorithm to assess grades.

Embarrassingly for Sir Keir, there is barely any difference between what happened in England and Wales.  Just hours before the Tory government announced its u-turn on A-level results, the Welsh education minister announced an identical u-turn for Wales.  The timing of the Wales announcement was undoubtedly spurred on by the Westminster u-turn that was scheduled to be announced at 5pm.  Just after 2pm a series of hastily written soundbites were put out by Labour education minister Kirsty Williams in the form of this statement.  In the second paragraph she even says it: "In light of decisions elsewhere".

Unlike the overbearingly repentant Gavin Williamson, there was no hint of regret or admittance of wrongdoing by the Welsh government.  First Minister Mark Drakeford later tweeted a very brief appraisal of the u-turn, again no hint of an apology.

So it seems that unfortunately for the leader of the Labour Party - the only difference between the actions of his man in Cardiff and the Tories in Westminster is that the Tories apologised. 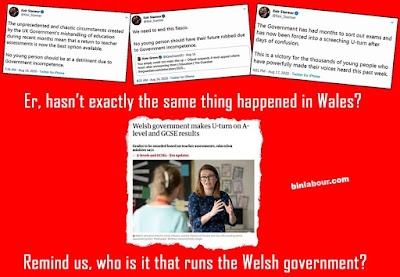