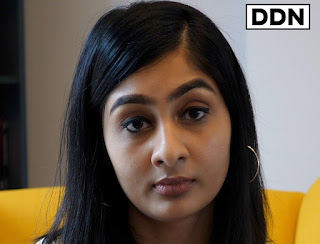 Labour's Zarah Sultana is the face of a new pro-migrant video from commie media outlet Double Down News.  The hard left MP for Coventry South spends five minutes telling viewers how Britain has a moral obligation to accept migrants fleeing war and persecution etc.  The problem is that everyone knows that they're coming from France, having already crossed continental Europe with the purpose of reaching soft touch Britain.  Sorry Zarah, but they already stopped being 'desperate refugees' some time ago.  The people crossing the English Channel to exploit our generosity are economic migrants.

From start to finish there is barely a sentence that drops from Zarah's mouth that isn't total nonsense.  From her opening gambit about the 'enemy of the working class' this is class war student politics, full of communist soundbites like 'know your enemy'.  In fact the whole production has the feel of a media studies project straight out of the university classroom.  Interspersed with provocative images aimed at creating sympathy for migrants, while demonising the Tories and those with wealth, the biggest problem is that this doesn't speak to its intended audience.

Labour have already lost the working classes and the sight of a young female MP with a plum in her mouth is enough to have most ordinary people turning off within seconds - and this is without the knowledge that Zarah was educated at one of the finest grammar schools in the Midlands, followed immediately by university and a career in politics.  Like her idol Corbyn, this girl who is lecturing the workers has never had a proper job in her life.  She says that the Tories 'hold the working class in contempt', but in actual fact those who despise the working class more than anyone else are the metropolitan elitists of the left.  Insults like 'gammon' and 'boomer' haven't come from the Tory ranks, they're used by the likes of Owen Jones, Ash Sarkar and those who sneered at the working classes with the paper maché creation put on display in Bristol recently.

Watch below, if you have a strong stomach.

"No-one puts children in a boat unless the water is safer than the land".  How many times do we have to say this - they're boarding those boats from France, not Syria.
at August 20, 2020