It's now a week since Dawn Butler just happened to be the passenger in a car that was stopped by the police.  Yet still she is whipping up hatred against them and doubling down on her false claims of racism.  On Friday she had an article published in the socialist Tribune magazine in which she repeated her claims, including stating once again that the driver was black, not of mixed heritage or white.  Presumably Sky News has seen the entire clip, as it was Sky who broke the story and edited the clip for their news bulletin.  They will know either way for sure, but they say nothing.  This is not journalism and provides an insight into how the mainstream media are now pumping out propaganda instead of asking questions.  The driver was not black, we can see that from the flashes of pale skin that Sky didn't blur out, but they are happy to go along with Dawn's lies because they too want to portray British police in a negative light.

In her article Butler refers to a meeting she had with Cressida Dick last week.  The meeting was pre-arranged and not specifically held for the purpose of discussing her friend's police stop - yes, that's right Dawn, it was he who was stopped by the police, not you.  However, despite saying that the incident was 'briefly discussed', Dawn released a statement on Friday in which the incident is the only thing discussed (see below).  Here she says that her friend 'wishes to remain anonymous', but that the Met 'will indeed corroborate that the driver is a black male'.  No such confirmation from the Met has arrived yet. 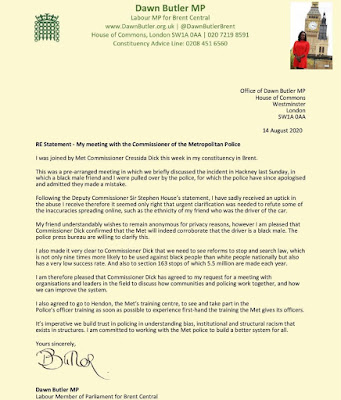 Butler's undoubted narcissism continues to blur her judgement.  In her article she manages to namecheck George Floyd as if her friend's routine police stop is as earth-shatteringly significant as Floyd's death.  She also drops a ball by confirming that the car in which she was travelling has rear tinted windows, inadvertently corroborating the fact that there is no way the police patrol could have identified the ethnicity of the driver anyway - even if he was black, which he clearly wasn't.  Dawn is also now making complaints about the backlash against her on social media.

On Friday she tweeted a montage of abusive comments directed against her and, although she doesn't make any reference to them being 'racist', her party leader jumped in with such a claim.  Sir Squeaky retweeted the montage stating that: "The racism that Dawn and many other Black MPs face is abhorrent. Completely unacceptable".  However, if you look closely at the montage (see below), it's clear that only a fraction of the comments could be described as 'racism'.  The overwhelming majority are just generally abusive towards an MP who has abused her position to whip up hatred against the police service. 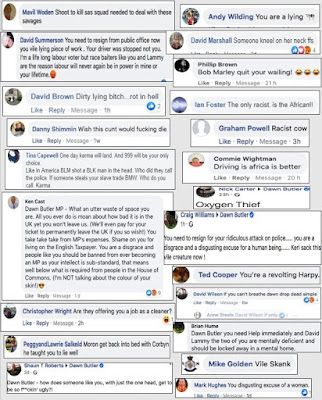 If Dawn Butler had chosen another course of action - perhaps in supporting the police and not conducting a week-long publicity drive against them - she would not currently be experiencing such a backlash.  And in supporting her race baiting it's clear that the future is grim under this Labour leader.
at August 16, 2020