Friday night's ugly scenes in Manchester were just the latest in a long line of major incidents completely ignored by the national media.  The scenes came a week after disturbances broke out in a small seaside town in Kent.  That incident was exposed by Nigel Farage on his YouTube channel.  Will Rusholme in Manchester be the next destination for the intrepid politician-come-reporter?  He's a brave man if he does head that way.

While most people's thoughts were on the 75th anniversary of the surrender of Japan, one community was more concerned with the 73rd anniversary of the independence of Pakistan from British rule.  Pakistan Independence Day was on Friday and the locals in Rusholme were keen to celebrate - despite Manchester currently being subject to a local lockdown.  Hundreds of people gathered on Wilmslow Road aka 'Curry Mile', so named because of its claim to house the largest number of south Asian restaurants in the UK.

Social distancing was non-existent - as were face masks - but drums, car horns, flares, fireworks, flags, cheering and dancing were very much in practice.  As the situation spiralled out of control the police were forced to close off the road.  Videos emerged on social media of flag waving mobs threatening the police and cheering as they retreated (see below).

The crowds were later dispersed following the intervention of a local Labour councillor.  Cllr Ahmed Ali assisted the police in persuading revellers to leave the area.  No arrests were made.

DCI Carol Hobson told the Manchester Evening News: "It is really disappointing to see behaviour of this type whilst we, as a community, are trying to combat Coronavirus and keep each other safe.  Friday night is one of the busiest in terms of demand on the police service and incidents like this one pull invaluable resources away from other people who may need the police more desperately. These blatant breaches slow us down".

The illegal gathering was also condemned by the local Labour MP.  Pakistan-born Afzal Khan had earlier urged his community to 'celebrate safely' and even tweeted a message in Urdu.  Clearly it fell on deaf ears, but he was keen to blame outsiders for the debacle. 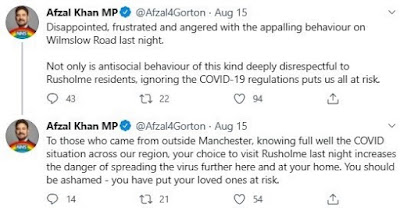 Strangely, the directly elected Mayor of Greater Manchester chose to stay quiet about the incident.  Andy Burnham is well versed in issuing statements about a whole host of issues, but on this he said precisely nothing.  He was joined in his silence by the mainstream media and there was no mention of it even in the local BBC news.  BBC Radio Manchester did however cover the story of a trans person who was 'misgendered' by a doorman.  Oh, the horror!

Meanwhile, the spread of coronavirus appears to be gaining pace - especially in BAME communities - but the politicians and the media don't want you to know the reasons why...