SO MUCH FOR LABOUR'S NEW-FOUND 'PATRIOTISM'

Labour's Neil Coyle waded into the BBC Proms row on Tuesday night with a couple of late night foul-mouthed tweets.  The outspoken MP didn't hold back as he singled out prominent Leave politicians for criticism.  The first tweet came at 23:32 in response to Nigel Farage who had earlier shared a video of a rendition of Rule, Britannia!

Remainer Neil was clearly triggered and said Farage's tweet was justification for hatred of an anthem that only 'shitlickers liked' anyway.  Coyle will have been equally miffed that Farage's video had been viewed over a million times and had registered more than 30,000 likes.  At the time of writing, Coyle's retweet had registered 162 likes. 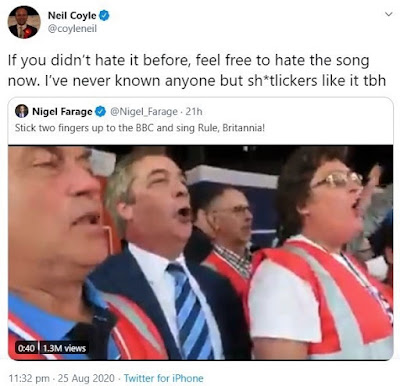 It's not clear if Coyle had been on the sauce last night, but just four minutes later he was off again and this time he had Boris Johnson and Jacob Rees-Mogg in his sights.  Rees-Mogg had earlier tweeted a video in which the PM criticises the Beeb's decision.  Rees-Mogg commented: "Britons must never be enslaved by political correctness".  The combination of two prominent Vote Leave architects had poor Neil spitting feathers.  "Absolute shitbag racist wankers" he ranted, followed by one more tweet at 00:05, before he presumably retired for the night.  Both tweets are still up at the time of writing. 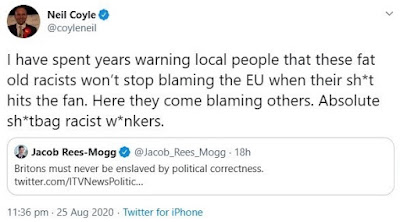 The second tweet doesn't make much sense and perhaps lends credence to the possibility that Neil had over-indulged himself.  Somehow the bitter Remainer had turned a tweet about BBC censorship into a tweet about Brexit.  As for 'fat old racists', at 41 Coyle is no spring chicken himself and there's only ten years between him and Rees-Mogg (who can't accurately be described as 'fat' either).

As a Labour moderate and outspoken critic of Jeremy Corbyn, Coyle's outbursts vastly undermine his current leader's position.  Keir Starmer declared earlier this year that his party should be 'proud to be patriotic' and in recent months he has delivered a marked change in tone from the overtly anti-British regime of Corbyn.  However, with messages like those above it's clear that Starmer is merely a front for a party that it is really just more of the same. 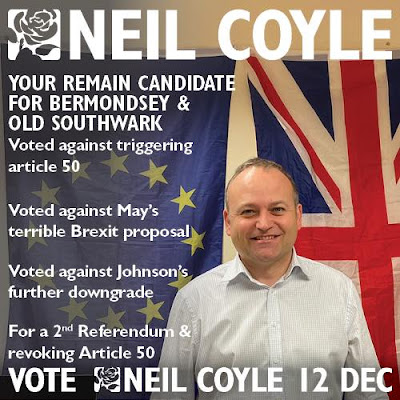 Coyle was one of the few Labour MPs to increase his majority at the general election.  Representing the 74 per cent Remain constituency of Bermondsey and Old Southwark, he increased his majority from 12,972 to 16,126, albeit largely at the expense of a collapse in support for the second-placed Lib Dems.  With London also the location of the only Labour gain in that election there is no doubt whatsoever that the capital is now the beating heart of Labour.
at August 26, 2020