KHAN STILL ON COURSE FOR LANDSLIDE

The latest opinion poll for next year's London mayoral election shows that Sadiq Khan still commands a huge lead over his Tory challenger.  The Redfield and Wilton poll was carried out between 5-7 August and uses a sample size of 2,500.  Comparing it to the other most recent poll - carried out by YouGov in March - Khan remains on 49 per cent, while the Conservative's Shaun Bailey has gained two percentage points and is up to 26 per cent. 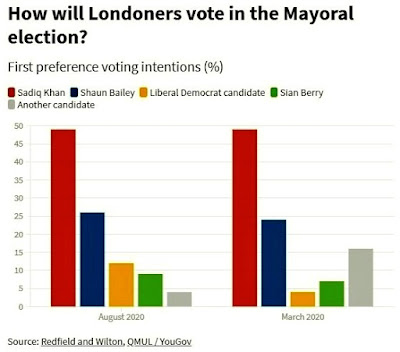 At 49 per cent Khan is well within the margin of error to take victory in the first round of voting, for which a candidate requires more than 50 per cent of the vote.  This comes despite Khan's woeful record during the pandemic, from his disastrous slashing of public transport services to his avoidance of scrutiny in the Greater London Assembly.

There is better news for Shaun Bailey in head-to-head polling.  If Khan fails to reach the 50 per cent threshold he would go up against Bailey in a run-off.  The latest poll suggests the result would be 61-39 in Khan's favour.  This is 12 points closer than it was in March, when YouGov scored it 67-33 in Khan's favour.

However, the latest polling figures present barely any advance at all when compared to the first YouGov poll conducted almost two years ago.  In December 2018 Bailey was polling 28 per cent in the first round and 38 per cent in the run-off.  The failure to make any impact on Khan's lead has led some in the party to suggest that Bailey should be given the elbow in favour of a 'big hitter'.  Either way, time is running out if they want to avoid a crushing defeat in just eight months time.
at August 14, 2020