Earlier this month The Argus newspaper in Brighton published a hilarious interview with a communist revolutionary group based in rural Sussex.  A spokesman told the newspaper the group were plotting a UK-wide revolution and bragged how his group had infiltrated the local council and, bizarrely, a local brewery.  Watch this space for revolutionary beer from Harvey's Brewery in Lewes!

The Argus shared a photo of 'Comrade Derek' who wore combats and hid his identity with a makeshift balaclava.  He was pictured in front of his bike, from which he had been distributing leaflets to local farms entitled 'The Dialectics of Agricultural Labour'.  A Facebook user mocked Derek by asking him if he had purchased his combats from Amazon.  "We don't use Amazon, one day we plan to communise it" came the flat response.

Derek's group are calling themselves Lewes Maoist Action and claim to be the only active Maoist organisation in Britain.  Mao Zedong's regime is by far the deadliest communist regime in history, but Derek says his group "do not seek to deny the mistakes, horrors and corruptions of the past".

Despite its miniscule ranks, the fledgling group has already experienced corruption of its own.  According to their Facebook page a plot was afoot by "Comrade Nigel, Comrade Imogen and Comrade Gary to thwart the progress of Mao Zedong thought in Lewes".  However, the sabotage would not deter the cause and the post added: "We will be having our usual cake stand by the castle gate on Saturday".  Phew!

The Lewes Maoists aim to achieve their revolution by way of handing out leaflets and infiltrating organisations.  They claim to have 'syndicate' groups setting up in other Sussex towns including Brighton, Newhaven and Hassocks.  The Maoists' Facebook page has also enjoyed a boost since The Argus published the interview.  It has gone from 91 followers to 349 in the space of three weeks, albeit the page has been up and running since April 2016!

Lewes is a small town eight miles north east of Brighton.  The Lewes Maoists have adapted the town's crest and replaced the heraldic lion with a hammer and sickle.  Pictured below is one of their leaflets. 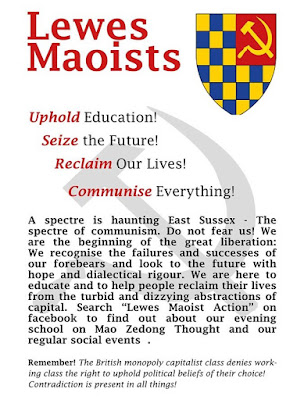 The full tongue in cheek interview can be read here.

That image of Comrade Derek is reminiscent of the scrawny little Antifa runt in America who was brutally mocked in a YouTube video (see below).