MOMENTUM ARE THE BOURGEOISIE

Momentum have been ridiculed over a Facebook meme they posted to their page on Friday (see below).  It was deleted after a huge backlash, but the screencap trended briefly on Twitter. 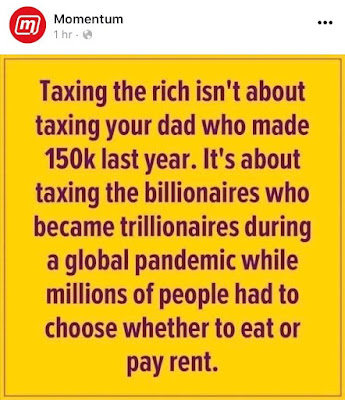 As if we didn't already know it - the Corbyn project was run by metropolitan elites all along.  They think that £150,000 is some kind of normal everyday salary.  Tell that to the working classes, in particular those who live north of Watford in that place that used to be called the Red Wall.

Huge own goal by Momentum and the bunch of middle class Londoners who run it.  Glorious.
at August 14, 2020