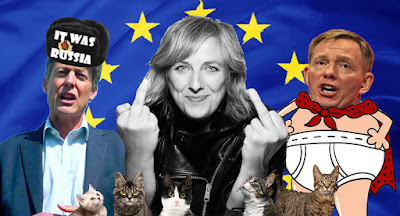 A cross-party group of MPs and peers have joined forces with a group calling itself 'The Citizens' to launch legal action against the UK government.  According to a website belonging to The Citizens they have written to the Prime Minister giving him a two week ultimatum to answer questions about alleged Russian involvement in UK elections - by which they mean, of course, the 2016 EU referendum.  Although the group is playing down its real agenda, there is no doubt about who is driving this legal threat and why.

Before we look at who is behind The Citizens, let's look at the list of MPs and peers who are reportedly signatories to their threat of legal action.

Ben Bradshaw (Labour MP for Exeter).  Bradshaw is one of the most extreme Remainers on the Labour benches.  He went against the party whip and refused to back the triggering of Article 50 in 2017.  In December 2016 he was ridiculed after claiming that Russian interference in the referendum was 'highly probable', despite admitting that there was no evidence (see video below).  Bradshaw is still so bitter about Brexit that he recently announced he now supports the breakaway of Remain voting Scotland and the end of the United Kingdom.

Chris Bryant (Labour MP for Rhondda).  Another ardent Labour Remainer who refused to back the triggering of Article 50.  He is a former chair of the pro-EU Labour Movement for Europe.  Like Bradshaw, Bryant has form when it comes to making unfounded allegations about Russia.  In 2012 he blamed Russia for exposing the picture that led to him being nicknamed 'Captain Underpants'.  He also later blamed Russia for trying to oust him from his position as chair of the all-party Parliamentary group on Russia.

Caroline Lucas (Green MP for Brighton Pavilion).  Another unapologetic Remainer who refused to back the triggering of Article 50.  A former MEP, Lucas has twice led her pro-EU Brexit-blocking party and was a prominent figure in the so-called 'People's Vote' campaign.

Alyn Smith (SNP MP for Stirling).  Remainer Smith was elected to Parliament in the 2019 general election, prior to which he was an MEP.  Last year he was forced to apologise after making unsubstantiated claims about the Brexit Party, labelling it a 'money laundering front'.  Despite being a so-called Scottish nationalist, on Brexit Day he addressed a crowd in Stirling announcing that he was 'born European' and wants to 'remain European'.

Lord Strasburger (Lib Dem peer).  A Remainer peer who has donated hundreds of thousands of pounds to his anti-Brexit party.  He was pictured at a Remain rally in 2018 alongside Westminster's resident remoaner Steve Bray.

Baroness Wheatcroft (Conservative peer).  A Remainer peer who has spoken out many times against Brexit, including a pledge to sabotage the Leave mandate by stalling its progress through the Lords.  She addressed a Remain rally in 2017 and in 2019 claimed that Britain is a 'Remain country' and Leave voters were 'wrong'.

So these are the six politicians named by The Citizens as co-signatories, some of whom have enthusiastically confirmed their support on Twitter.  All of them are unquestionably Remainers, but what about the people behind The Citizens group?

More than thirty people are named on the 'About us' section of their website, the most prominent of which is journalist Carole Cadwalladr.  Carole is famous for spreading conspiracy theories about Brexit, in particular claims of Russian involvement.  She has earned many nicknames among Brexiteers, including 'Conspiracy Carole' and 'Carole Codswallop'.  The BBC's Andrew Neil once likened her to a 'crazy cat lady' in a 3am tweet he later deleted. 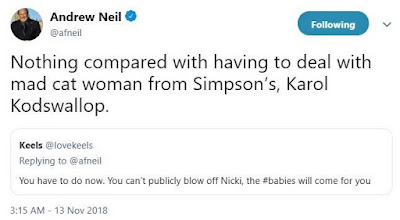 Cadwalladr appears to be one of the main actors behind The Citizens and last year organised a GoFundMe site on their behalf which raised more than £350,000.  Although the page is titled 'Democracy: The Fight Back', the description makes it very clear that the campaign is solely dedicated to fighting Brexit and proving that the referendum was somehow fixed by Russia.

Speaking of foreign interference, many of the team members named on The Citizens website are not even British citizens.  Paul Olivier Dehaye is a Swiss national.  The Citizens' video editor Thomas Héléta is thought to be a French national.  Also working on their video production is Irishman Sheridan Flynn who wrote an article last year labelling Brexit a 'festival of resentment' driven by English nationalists.  At least ten other members of the team - Karim Amer, Geeta Anand, David Carroll, Alexandra Kondracke, Jehane Noujaim, Matt Rivitz, Angela Robinson, Cyndi Stivers, Bina Venkataraman and Shoshana Zuboff - are American citizens.

How ironic that one in three of the team members at The Citizens are not actually British citizens.  When is foreign interference in our democracy not foreign interference?  Ah yes, when they're campaigning against Brexit.  Remember when David Cameron invited Barack Obama to come and lecture us Brits about the dangers of voting Leave?  There was no need for conspiracy theories about that interference.

Matt Rivitz is the co-founder of Sleeping Giants, a left-wing group in America that targets pro-Trump news outlets and tries to close them down by intimidating advertisers.  This defunding tactic has been emulated in the UK by hard left groups aiming to do the same thing to the likes of the Daily Mail and Express newspapers.  Remember that The Citizens is styling itself as a pro-democracy organisation, yet it has on its team individuals dedicated to shutting down political opposition!

Rivitz is by no means the only Trump hater at The Citizens.  Also named is Christopher Steele, a former MI6 officer who spent six months compiling a dossier alleging collusion between Donald Trump's presidential election campaign and Russia.  Like much of the work carried out by his comrades at The Citizens, it is largely unsubstantiated.

Another purveyor of dodgy claims is Shahmir Sanni.  He claims to have worked for the Vote Leave campaign and has made several allegations about illegal spending, although he cannot prove them.

So there we have it.  The Citizens is undeniably a bunch of vociferous Remainers and like-minded Americans, all of whom share a hatred of Trump and a desire to rewrite history and portray democratic results that didn't go their way as the work of Vladimir Putin.

This legal challenge to the British government won't stop Brexit, it is merely a desperate act of vengeance by the bitterest of sore losers - something that we have already seen once this year already with the witch hunt against Dominic Cummings - a hate campaign that had nothing to do with lockdown travels, but everything to do with Brexit.
at August 22, 2020