Black Lives Matter protests continue on both sides of the Atlantic, albeit on a much smaller scale.  Thankfully Britain's mob has yet to achieve the carnage that has taken place in American cities, but we are of course one black death away from similar scenes here.  Scenes outside Colindale police station in London on Friday confirm that we are now reaching a stage where any arrest of a black person is met with protest and a potential flashpoint.  BLM UK appear to be well organised and can mobilise quickly - no great surprise seeing as more than a million pounds has flooded into their coffers this summer.  Dawn Butler's exploitation of her recent encounter with the Met is another example of how individuals are desperate to inflame tensions and the mainstream media is only too happy to give them a platform.

Last weekend's Emancipation Day event in London brought BLM onto the streets again, complete with a new paramilitary-style unit calling themselves 'Forever Family'.  Many of the protesters waved placards demanding reparations for slavery, despite the fact none of them had ever actually been slaves themselves - or their parents or grandparents for that matter, something alluded to in last week's most shared... 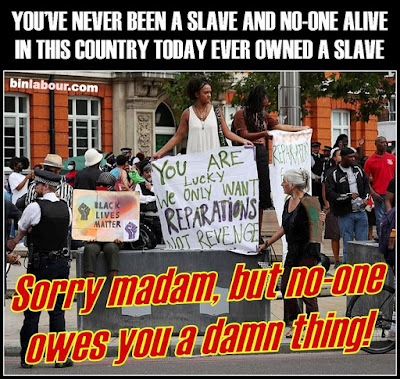