Despite our relatively small following on Twitter we appear to have fallen foul of social media's woke overlords.  Richey is now locked out of Twitter while an appeal is in process, although the account is still visible to others.  On Tuesday a number of prominent accounts were suspended, all of which were satirical accounts that mocked the left and political correctness.  Some of them have since been restored, including the famed parody account Titania McGrath.  Others affected included Jarvis Dupont, Sir Lefty Farr-Right QC and Guy Verhoftwat.

Justifying our ban, Twitter highlighted a tweet from more than a fortnight ago that it said violated their rules on 'abuse and harassment'.  Again, Twitter has either failed to comprehend sarcasm or is deliberately targeting political opponents of the left.

Cops should have knelt on his neck to teach him what it why the mural is there, instead he'll probably just get a Whopper and fries.
— dan aldo Trading (@DanAlTrad) August 1, 2020


The Black Lives Matter street mural outside Trump Tower has been vandalised many times since it was installed.  All Richey did was copy in a video of a black woman defacing the mural with the comment: "Should they have knelt on her neck too" followed by a thinking emoji.  The tongue-in-cheek remark was intended to undermine his argument.  Little did he know that weeks later it would be undermining Twitter's argument - for how can they censor our account and not the user who made the original remark?

Richey has chosen to appeal the decision, pointing out the double standard.  Of course this could potentially lead to further action.  After all, Twitter's left-wing bias is not in any doubt - this is how their official account looks... 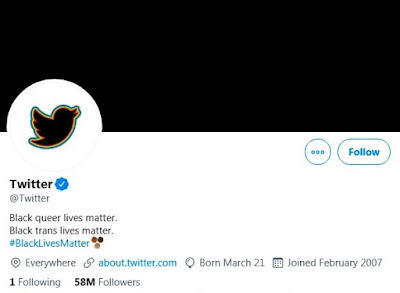 The video posted by Richey can be seen below.  It features a prominent anti-BLM activist called Bevelyn Beatty pouring black paint over the bright yellow mural. 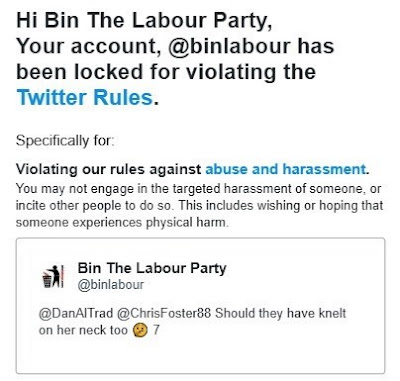 This could be the end of us on Twitter, but you can still find us on Twitter's competitor - the free speech Parler app.  Our user name is Binlabour.
at August 19, 2020