Labour frontbencher Toby Perkins has lashed out at Darren Grimes over a tweet in which the Brexit activist criticised the BBC.  Grimes's tweet referred to the upcoming Spitting Image reboot and the BBC's publicity coverage ahead of its broadcast.  Perkins confidently lashed Grimes stating that the programme was commissioned by ITV - not the BBC - and accused him of being 'factually incorrect', spreading 'misinformation' and of killing truth itself.  Hilariously, the Chesterfield MP has actually got it all wrong himself. 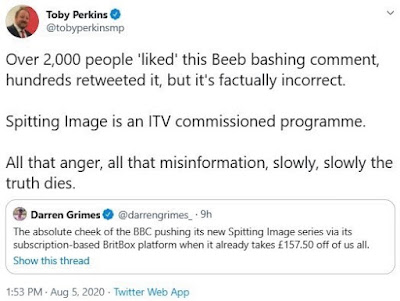 Historically, Spitting Image has been an ITV production, but if Perkins had only checked beforehand he would have discovered that this has now changed.  The upcoming Spitting Image show has been produced for the BritBox subscription service as a joint venture by both ITV and the BBC.  There is in fact nothing ''factually incorrect' about Grimes's tweet.

Given Perkins' concern over the numbers involved in Grimes's tweet, perhaps we can surmise that the Remainer is a little aggrieved that while he himself has 25,000 followers on Twitter, the young Leave activist has a whopping 124,000 followers.  Clearly that hurts and his woeful attempt at smearing Grimes will hurt more once it dawns on that he's got his Spitting Image 'facts' completely wrong. 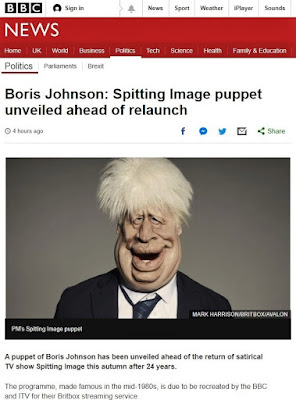