LABOUR MEMBERS NOT CONFIDENT FOR 2024

Pro-Labour website LabourList has conducted a poll of its visitors in which over half said the party could not win the next general election.  Of all the possible outcomes, the most popular response was a Tory majority (26.7%).  This compared with just 8.4% for a Labour majority.  The 7,197 polled thought that a Labour-led coalition (14.9%) or a Labour minority government (11.7%) was more likely than a Labour majority. 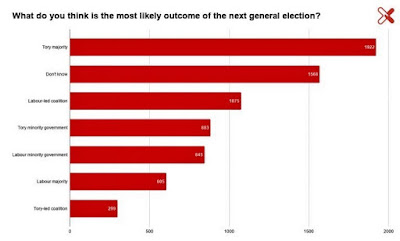 There was worse news for Keir Starmer when it came to his leadership.  Asked whether they were happy with his leadership the response was almost a 50-50 split, with 'very unhappy' being the most popular response (34.3%).  This was marginally ahead of 'very happy' (33.8%). 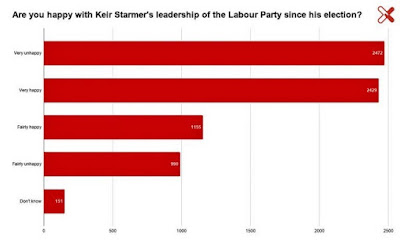 While those polled were split on Starmer, the response was more universal on other questions.  81.5% thought the party should support the cancellation of local authority debt.  75.2% thought that proportional representation should be introduced for all UK elections.  70.8% agreed with Dawn Butler that the Metropolitan Police is institutionally racist.

Readers were also asked who their favourite shadow cabinet members were.  Amazingly the most popular response was David Lammy.  He was followed by Ed Miliband, Rosena Allin-Khan and Angela Rayner.  There were mixed results for the most senior members of Starmer's team.  While Lisa Nandy (Shadow Foreign Secretary) and Anneliese Dodds (Shadow Chancellor) polled well, the incredibly dull Nick Thomas-Symonds (Shadow Home Secretary) appeared way down the list with just 392 votes compared to 2,727 for Lammy. 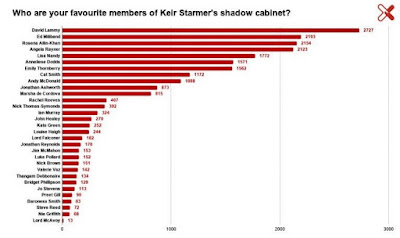 The poll was carried out between 14-16 August and 80.9% of those polled said they were Labour Party members.  Full results can be found here.
at August 18, 2020