A Labour councillor in Liverpool has let rip at Keir Starmer on her Facebook page, labelling him a 'brylcreemed shithouse'.  Cllr Sarah Morton was one of a number of hard left candidates selected for last year's council elections in the staunchly Labour city.  Writing in response to the government's A-levels u-turn, she took umbrage not with the wicked Tories, but her own party leader.  Accusing Starmer of taking credit for the u-turn, Cllr Morton issued a warning to Starmer and his deputy Angela Rayner: "This was a grassroots win, so you and Ange should be worried, because they are coming for your jobs, and the rest of us arl [old] activists, will do whatever we can to support them".

The full post was shared in a screenshot by her colleague Cllr Malcolm Kennedy (see below).  Cllr Kennedy - a moderate and Starmer supporter - commented:  "I must admit that when Corbyn was leader I had some pretty stern criticisms. Lamentably, I failed to mention his hair style".  Kennedy also fired off a tweet to Brylcreem, joking:  "Are you interested in a great marketing opportunity?" 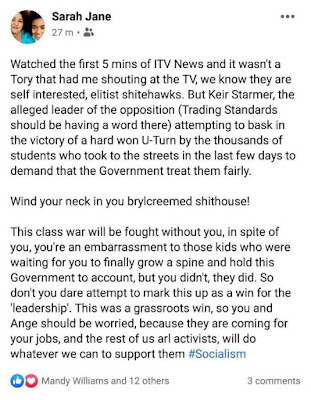 Tension in Liverpool Labour is still high following last year's controversial de-selections ahead of the council elections.  At least five sitting councillors were de-selected and replaced with hard left pro-Corbyn candidates, one of whom was Morton.

The left's campaign against Starmer has picked up in the last week and they are now openly discussing a leadership challenge next year.  It's almost like-for-like revenge for the leadership challenge against Corbyn one year after he was elected leader.  On Sunday the hashtag #StarmerOut trended on Twitter for several hours.

Cllr Morton defended her comments about Starmer in a response to the Liverpool Echo...


"As a councillor and trade unionist representing a ward that consistently ranks highly on markers of deprivation, I know that many of those I represent have been frustrated by the positions taken by the Labour leadership on issues such as support for renters, the Black Lives Matter protests and the response to the Coronavirus crisis.

I’m a working class woman and anyone who knows me will tell you I’m not known for mincing my words. I use a different social media account for my public-facing councillor duties and would express my position differently in such a context".