It was more than a week ago that The Times first broke the story that the BBC were thinking about dropping Rule, Britannia! and Land of Hope and Glory from the Proms.  The immediate backlash put the Beeb in a spin, but they took full advantage of the absence of a live audience and announced that the songs would be included - but without words.  This was clearly pandering to the anti-British Marxists of Black Lives Matter, which the Beeb has spent the last three months promoting.

It's not likely we'll see Laurence Fox on the BBC again, especially seeing as the anti-woke actor has gone into full attack mode following the Proms censorship.  It was one of his tweets that featured in last week's most shared. 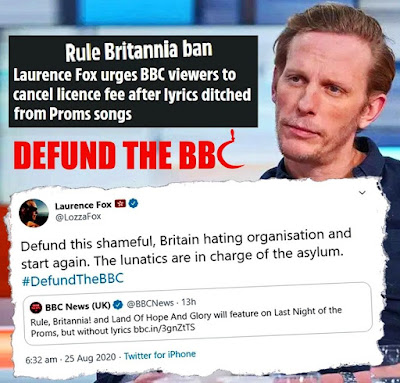