ASHWORTH WANTS OUT OF LOCKDOWN 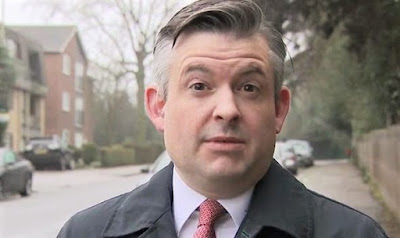 The Shadow Health Secretary has constantly sniped at the government throughout this pandemic.  Jon Ashworth also repeatedly questioned the speed at which the lockdown was lifted.  It was as if he wanted Britain to remain in permanent lockdown, but as a Leicester MP perhaps he should have been careful what he wished for.  Remarkably, Jon is now complaining about the length of the Leicester lockdown, despite all the evidence to show that the city is the worst affected area of the country by far.

On Friday he was moaning about an email from health minister Nadine Dorries in which she confirmed that Leicester would remain in lockdown for now.  This is an "unacceptable way to treat people in Leicester" he tweeted.  This followed another tweet in which he declared: "People across Leicester have patiently observed the rules and made huge sacrifices. Many were hoping for progress today. Now we learn the restrictions will be reviewed early next week. People across Leicester deserve better".

Ashworth was retweeting a local BBC reporter who had quoted a government spokesman as saying that infection rates had declined in the city.  That was odd, because ten days earlier the infection rate in Leicester was 1,426 cases per 100,000 and according to the latest data released on Friday it stood at 1,515.  So in actual fact the rate is rising and yet Jon Ashworth is demanding that the lockdown be ended!  This is the same guy who warned against easing the national lockdown when rates were falling.  The mind boggles.

Below are the current top ten worst affected local authorities for infection rates as of Friday 14 August according to the government website.  Figures provided here are infections per 100,000 residents.  As you can see, Leicester is far and away the worst affected.

If Jon Ashworth wants to get Leicester out of lockdown then clearly that infection rate needs to drop.  Unfortunately it is very clear from the evidence that people across Leicester have not 'patiently observed the rules' as Jon puts it.  And there remains an uncomfortable truth that certain communities have done more than others to help spread the virus.  Take Jon's own Labour colleagues for instance.

In the past week alone two Labour councillors in Leicester have been exposed breaking the lockdown rules.  Cllr Ruma Ali held a barbecue to celebrate the end of Eid while her colleague Cllr Rashmi Joshi was filmed at a crowded Hindu temple.  Is this symptomatic of a wider problem in the south Asian community?  Or is it just a coincidence that Labour's Luton mayor Tahir Malik resigned earlier this month after attending a party while five Labour councillors in Sandwell were forced to apologise after attending an event organised by the Overseas Pakistanis Welfare Council?

If Labour really want an inquiry into the disproportionate number of BAME deaths, they may not like what it uncovers.
at August 15, 2020