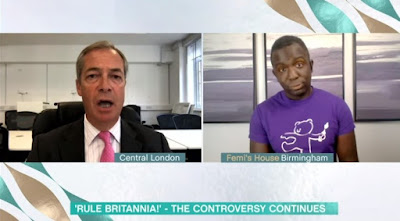 On Wednesday morning the BBC Proms decision was debated on Good Morning Britain by Nigel Farage and Remain activist Femi Izawally.  Kicking off the debate Femi made the issue about race in three seconds flat before going on to criticise the BBC over their use of the 'n' word recently (never mind the fact that the 'n' word is used by rappers and grime artists ad infinitum).  The deviation from the issue in question irked presenter Eamonn Holmes and the pair would later clash over whether Femi had got the memo.  Femi responded by deviating further and returning to his favourite topic of Brexit, at which point Farage put him in his place by alerting viewers to the fact that Femi represented a 'tiny, extremist minority'.  Given that Femi had just referenced Black Lives Matter while wearing a t-shirt featuring a molotov cocktail Farage had hit the nail on the head.

Watch the full exchange below.

For those not convinced that Femi's bizarre t-shirt features a teddy bear hurling a petrol bomb, the origin of that motif is a Banksy mural in Bristol (see below) - in which said character is throwing the device at the police.  Let that sink in. 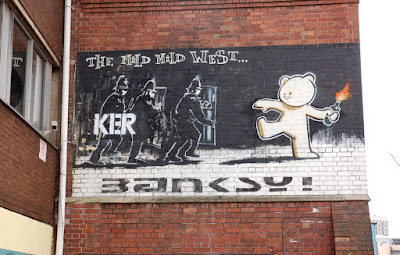 Femi was clearly rattled by his rinsing on national television and spent the rest of his day endlessly tweeting and retweeting about it, including a call for 'racist' Eamonn Holmes to be sacked.  Narcissist Femi was still tweeting about his TV appearance at 03:52 this morning, but then he doesn't have a proper job...
at August 27, 2020