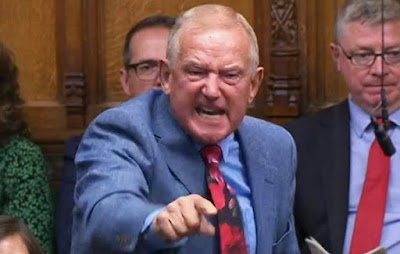 Huddersfield MP Barry Sheerman is to take a break from Twitter following his controversial tweets on Sunday.  In addition to his online apologies, the backbencher also expressed remorse in a letter to local members, a copy of which was also sent to Keir Starmer, Angela Rayner, chief whip Nick Brown and the Board of Deputies of British Jews (see below).

I want to offer you my heartfelt apology.

You may have heard that there has been a great deal of criticism of my recent tweets regarding my strong reaction to Boris Johnson’s list of people who he might place in the House of Lords.

Some of these people hold partial responsibility for our decision to leave the EU, and our subsequent heavy losses in the General Election. They included people whose elevation to the Lords would not be our country’s best interest, but would instead be a reward for loyalty and support for the Conservative Party.

I was so angry I was intending to liken the places in the Lords as a “thirty pieces of silver' type of reward.

This alone is an unpleasant thing to say but I tried to be too clever and looked up the currency that might have been used 2,000 years ago, and found information suggesting it was the shekel.

In a separate comment, I also chose two rich businessmen who have received negative press attention as examples of the types of people being raised to the Lords by the Government.

It never entered my head when I was making that comment that the two people I mentioned were Jewish.

I can see how offensive my comments have been, given this, and I am profoundly sorry. It was never my intention to make any implication about Jewish people, and I am horrified that I inadvertently did so.

I spoke at our CLP’s online meeting on Friday about how the Party needs to be strong on anti-Semitism, and I have always greatly valued the Jewish community who I have worked alongside since I joined Labour Friends of Israel at university.

I am ashamed that my remarks were ill thought through, and that I have subsequently hurt people.

I am going to give Twitter a rest for a period to reflect on my thoughtlessness and how I can do better.

I want to assure you that I pledge to continue to work with all members in our common struggle for a more equal, just and sustainable society.


The letter was reportedly sent after Barry was contacted by the chair of the Huddersfield Constituency Labour Party.  Paul Cooney told the Huddersfield Examiner that he recommended that the letter be written and that the MP also withdraws from Twitter.  Referring to the Twitter suspension, Cooney said it was "something which we had previously suggested to him on other occasions recently".  Sheerman is known for his blunt language on Twitter and apparent inability to think before he tweets.  Last month the ardent Remainer demanded another EU referendum, despite the fact the UK left six months ago.

Sadly for Barry, his letter and apology was still not quite enough for the CLP as they are still writing a formal complaint about his alleged anti-Semitism to head office.  It appears that Labour's longest serving MP is not universally popular in his local branch.  The 79-year-old has represented Huddersfield since 1979, but has avoided deselection processes ahead of the last two elections.  A local party member told the Huddersfield Examiner last year: "There's a cohort of members who are absolutely pissed off as [him continuing to 2024] will take him to 84 years old.  Members want someone younger who's more approachable and there's also a lot of union pressure on him".

It's unlikely that Sheerman will face disciplinary action and he will be thankful for that.  He has previously expressed a wish to become the 'Father of the House', a title bestowed on the Commons' longest serving member.  Prior to the 2019 election the title was held by Ken Clarke and would have passed to Labour's Dennis Skinner had he not lost his Bolsover seat.  The title has now passed to Sir Peter Bottomley, the Tory MP for Worthing West.  Sheerman is next in line.  In any other profession people tend to retire by the age of 70, but this is the Westminster gravy train...
at August 05, 2020