LABOUR BACK THE MIGRANTS

The migrant invasion via the English Channel is being welcomed by many in the Labour Party and any attempts to stem the flow is predictably being met with criticism.  Once again Labour shows its true colours and provides a timely reminder that however unable and/or unwilling this Tory government is to stop the boats - if Starmer was in Number Ten he would probably be offering to collect the migrants directly from Calais.  After all, in the eyes of the left these are the Labour voters of tomorrow.

On the Twittersphere many Labour MPs and activists are signalling their support for the illegals.  While Starmer himself has said little about the situation, his Shadow Home Secretary has written to Priti Patel denouncing the government's 'lack of compassion' for the migrants.  Nick Thomas-Symonds' letter can be seen below (click to enlarge).  It was retweeted by Starmer. 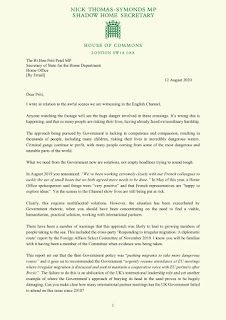 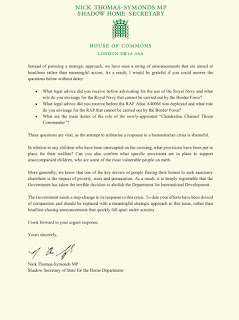 The hard left Socialist Campaign Group has put out its own statement regarding the situation, declaring 'solidarity' with the migrants.  The statement has been signed by all the usual suspects - Corbyn, McDonnell, Abbott, Burgon, Butler and 26 others (see below). 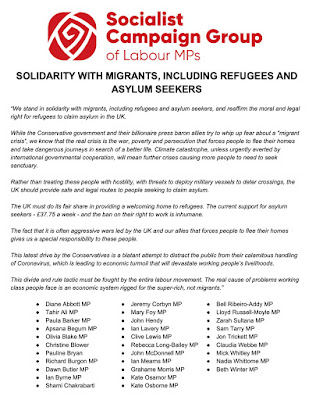 Many of those named above have tweeted incessantly about the situation in recent days, but support for the invasion is not limited to the hard left.  Here's a selection of tweets from Labour MPs including those from both the hard left and the centre, proving that open door migration is a unifying aim of the party whoever is in charge...

Before you decide all that matters is to stop the boats, ask if you are confident no one in them should be given sanctuary here from the horrors that made them get into them in the first place. #refugeeswelcome https://t.co/vGtERRzrF1
— stellacreasy (@stellacreasy) August 11, 2020

Who will speak up against the demonisation of migrants? ⁦- @OwenJones84⁩ https://t.co/AVGNpbW3ht
— Clive Lewis MP (@labourlewis) August 12, 2020

Imagine your son or daughter was on that boat. Stop sensationalising this.

These are people fleeing dangerous and difficult situations at home and are putting their lives at risk to get to somewhere safe. We have a duty to help and not be voyeurs. #RefugeesWelcome https://t.co/EiInhuzkae
— Anna McMorrin MP 🏴󠁧󠁢󠁷󠁬󠁳󠁿🇪🇺 (@AnnaMcMorrin) August 10, 2020

It should not take an ice cream brand to call on the government to show compassion and decency towards people fleeing war, torture and climate change.

We have a legal & moral responsibility to refugees fleeing famine, war and violence. They are not the problem. The problem is the dangerous routes they must take.

We should be looking at safe and legal routes, not intimidating them with Navy ships. https://t.co/6vEBDaYSxx
— Bell Ribeiro-Addy MP (@BellRibeiroAddy) August 10, 2020

These are some of the most vulnerable people in the pooorest vessels crossing one of the busiest stretches of water in the World.

Sky News are doing this without consent its the worst form of journalistic voyeurism https://t.co/0CbwrLwnLy
— Alex Sobel (@alexsobel) August 11, 2020

This is an excellent letter from @NickTorfaen to the Home Secretary about her dog whistle rhetoric on adults and children crossing the English Channel in desperate circumstances. The emphasis should be on humanitarian dialogue with other countries to find solutions. https://t.co/k4kRhTQ10T
— Jo Stevens (@JoStevensLabour) August 12, 2020

People fleeing war, famine and persecution shouldn't be confronted by gunships and hostility, but instead offered safe, legal routes to asylum.

Its ludicrous to suggest vulnerable migrants pose a threat to our security, economy or social life

This is classic Tory divide & rule

Once again the Labour Party are misjudging voters.  A YouGov poll released earlier this week suggests 50 per cent of Brits don't believe the UK has a responsibility to protect those making the crossing, compared to 35 per cent that do.  While most current Labour voters may support the migrants, the party cannot win an election by further alienating the people who once upon a time elected a Labour government - the working classes. 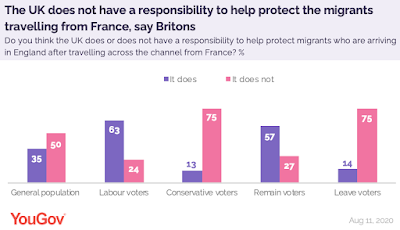 The final destination for migrants will not be the communities where Labour MPs live.  The metropolitan elites who dominate today's Labour Party will not suffer the consequences of the actions they support.  It's the working classes who will compete for hospital beds, school places and jobs.  These are the people who are outraged at what is happening in the Channel and if the Tories don't get hold of this problem then Nigel Farage will fill a political vacuum - again.

Last weekend the Labour Party in Bath found out just how strongly people really feel about the situation.  They decided to take up the old communist standard of whipping up hatred against the rich, but their Twitter poll backfired spectacularly - yes, even on the predominantly left-wing platform of Twitter... 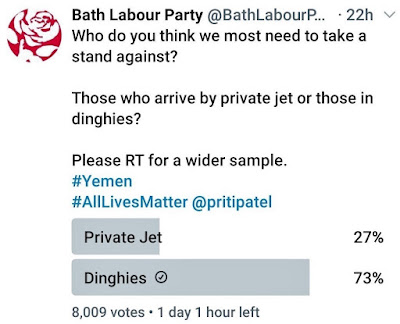 The final result of their poll is not available, because they deleted it.  Needless to say, overwhelmingly white and affluent Bath is not going to be a recipient of most of the so-called 'refugees' landing in Dover.

Make no mistake, a Labour government would open the floodgates - again.
at August 13, 2020