Camden has become the latest loony left council to install an LGBT crossing - as opposed to a standard zebra crossing.  The 'trans crossing' was unveiled on Monday by Labour councillors Danny Beales and Sabrina Francis, the latter doubling up as Camden mayor.  Instead of the traditional black and white crossing, this new installation is in the colours of the 'trans flag' (yes, there is such a thing).
The trans crossing is in contrast to the various rainbow crossings or 'pride crossings' which have sprang up in several UK cities in recent years.  As it suggests in the title, these are painted in the colours of the gay pride rainbow flag.  Some are temporary and installed to coincide with 'pride month', while others are permanent.  In 2019 Labour-dominated Lambeth Council was the first to install a permanent rainbow crossing in the UK.  The colourful crossings have been popping up across London and the phenomenon has spread to Labour-run cities such as Birmingham, Bristol, Cardiff and Leeds.
These woke crossings are rarely installed without controversy, primarily on health and safety grounds.  They are a hazard for disabled people, particularly those with learning difficulties, sight problems and guide dogs.  Dogs are trained to use traditional black and white crossings, so the colourful and often vertical stripes cause confusion with potentially fatal consequences.  And it's not just dogs that find the crossings problematic.
The following video shows two mounted police officers approaching such a crossing in Sheffield earlier this year.  Both horses became distressed when they saw the bright lines and it is only thanks to the  officers' horseriding skills that no-one was injured.
When Cllr Beales posted his virtue signalling photographs on Twitter he was inundated with so many complaints from disabled people that he locked down the tweet so no-one else could comment.  Although the woke tend to throw names around whenever their narrow world view is questioned, there was little 'homophobic' about the backlash.  One of the most popular comments came from a pro-BLM pro-trans pro-Remain #FBPE account: "Please rethink these terrible crossings.  They are a hazard to people with vision and cognitive disabilities.  There are other, safer (for everyone), ways to show the trans community is welcome".  Another commented: "Pity that Camden pitches different excluded groups against each other.  To support the trans community you're excluding the disabled community.  So easy to create designs that support both, but again disabled people are let down".
Cllr Beales responded to both these comments with the same sneering message: "Thanks for your message.  I’d be very happy for you to contact me to discuss the difficulties you face crossing these roads compared to black and white crossings.  Happy to meet you there to be shown first hand".
Such a condescending attitude to genuinely voiced concerns - concerns that carry such gravitas that the roll-out of LGBT crossings was supposed to have been halted earlier this month.  Last week Sadiq Khan released a statement via Transport for London calling for a temporary pause to all future non-zebra crossings across the city. 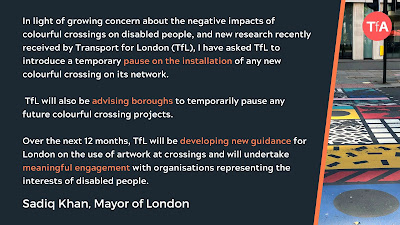 It seems that Camden Council either didn't get this memo or didn't care.  For some Labour politicians wokeness trumps all.
at November 10, 2021