Joe Biden's Easter message was not so much about a religious holiday, but about maintaining a grip of fear on the American people.  Sleepy Joe made two appearances over the weekend, the first of which was a recorded message in which he appeared maskless alongside wife Jill.  There was no mention of Christianity or Jesus Christ, but he told viewers that it was their 'moral obligation' to get a Covid vaccine.  Unfortunately, everyone who has received a vaccine in the US has been told bluntly by Democrat politicians and their media propagandists that they must continue to isolate themselves, wear masks, social distance and not travel - anywhere.  Remind us again Joe (and Boris), what is the point of vaccinating people if it does not restore a single shred of liberty that has been stolen from them?
Considering that Joe and Jill appeared content to record their earlier message without a face mask in sight, the follow-up more than made up for it.  As the couple stood on the White House balcony they were joined by the traditional White House Easter bunny, now complete with a face covering.  Below them was a display featuring almost a dozen masked-up bunnies and a similar number of masked-up chicks! 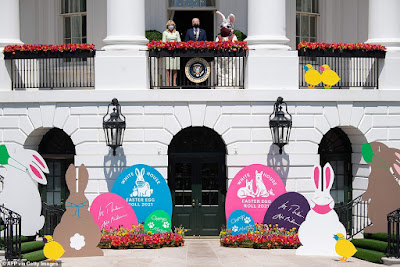 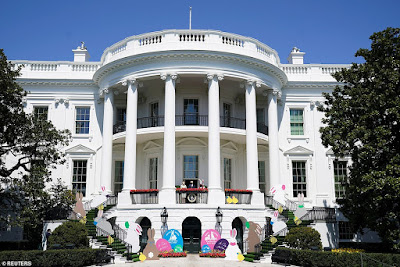 Make no mistake, the message here is one of fear.  Biden has expressed his anger in recent weeks over Republican states that have lifted the mask mandate.  He has demanded that Americans continue to mask up - it's their 'patriotic duty' he says.  He has naturally been joined in his condemnation by pro-lockdown media propagandists, but embarrassingly the state that has attracted the most controversy - Texas - continues to see virus numbers falling almost a month after lifting the mask mandate and other restrictions.
The lifting of restrictions by Republican states has seriously undermined Biden and the insidious plans laid out to him by his globalist puppeteers.  The greatest fear of our totalitarian overlords is that people stop living in fear.  Once fear evaporates their ability to control us is severely diminished.  That's why here in Britain our Prime Minister wants us all to test ourselves twice a week.  More tests means more cases means more restrictions.  It also means more deaths, because more positive tests will result in more people having died within 28 days of a positive test - regardless of how they die or whether they have actually been sick with the virus.
One of the finest examples of why our governments fear the return of liberty to their people was provided in an interview given by Dr Leana Wen, a public health professor in the US.  She told CNN's Chris Cuomo that only vaccination should provide people with 'freedom'.
Click below for the video and watch to the end.
As we have seen on both sides of the Atlantic - vaccination does not provide anyone with freedom.  Our new overlords will not allow vaccines to end their reign of tyranny, but they will give people false hope that it will.
at April 05, 2021