As Keir Starmer and his party trundles on desperately looking for something significant to campaign on, one thing is already in the bag - the postal votes.  Labour began plugging postal votes for the forthcoming elections up to six months ago.  It was a well calculated move.  At that point no-one had any idea how long the second wave of coronavirus would last and how it would affect turnout.  Labour marketed a postal vote as the 'safe' way to vote.  Meanwhile, as per usual, the other parties did next to nothing on appealing for postal votes.
The postal vote is an insidious election weapon deployed by the left at every election, especially in inner city areas with a certain demographic.  It is why they will resist at all costs any notion of clamping down on postal voting or requirements for voter ID.
There is currently a huge row raging in the US over new voting laws in the state of Georgia.  Postal voters there will now have to provide some form of identification - the law was initiated by Republicans and, of course, has been staunchly contested by Democrats.  In last year's US elections the Democrats scored massive victories, securing both the presidency and both legislative houses.  They achieved this largely thanks to postal voting.
No-one will forget the way in which the 2020 US presidential election swung suddenly and inexplicably in favour of Joe Biden once postal votes were dumped overnight in key states - not least Donald Trump.  UK Labour wasted no time in jumping on the back of Biden's success and made no secret of their inspiration... 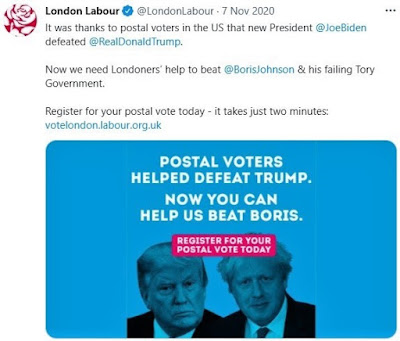 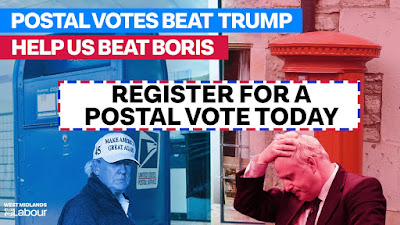 Sadiq Khan also referenced Trump's defeat in one of his many video pleas for postal votes over the course of the last six months (click below).
Last month another video was released by Khan's campaign, this time featuring a Democrat politician from the state of Georgia.  In a scripted monologue Stacey Abrams urged voters in London to register for a postal vote so that a victory for Khan could deliver a 'more inclusive and equal future'.  One suspects that in this dystopian future some people will be more equal than others...
Khan has been one of Labour's biggest individual proponents of postal votes.  Although opinion polls suggest he is nailed on for victory next week, Khan's huge ego means he will settle for nothing less than a thumping win.  In a further reference to Biden's victory, he even demanded that the controversial Dominion vote counting machines used in the US elections were deployed for the London mayoral election.  It was later confirmed that the result of this election would not be announced until at least Sunday 9 May, due to social distancing measures for counting.  Such a long delay to the result also harks back to the drawn-out conclusion to the US presidential election. 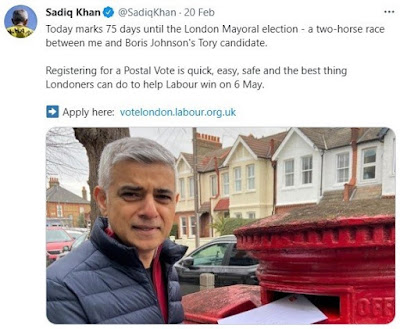 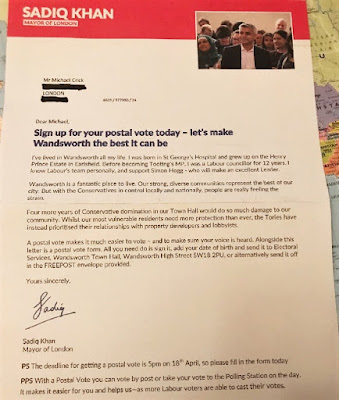 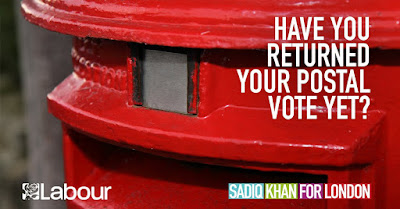 Make no mistake, when the postal ballots are emptied across the UK next week, they will be almost entirely for one party.
at April 29, 2021