A Labour minister in Wales has apologised after he criticised the level of news coverage in relation to the Derek Chauvin trial.  Lee Waters is the deputy minister for transport in the Welsh government and MS for Llanelli.  Waters tweeted his disquiet while watching the News at Ten on Tuesday night (see below screenshot, tweet has since been deleted). 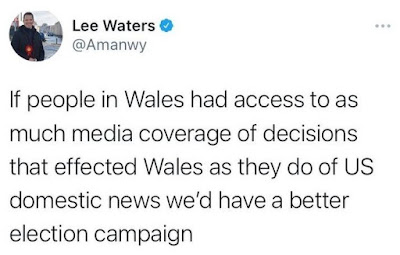 We'll gloss over his spelling error and go straight to the controversy itself.  News coverage of events in the United States over the last eleven months has not only been excessive, it's been downright misleading and could be argued that it has contributed to copycat violence in Britain.  A Labour politician would never call out the false narrative, but in raising objections to the level of media coverage, Waters still has a valid point.
The problem is the fact he apologised for it.  To apologise for something so trivial is indicative of the cult-like status achieved by BLM and its saint - the career criminal George Floyd.  The hysteria whipped up by his innocuous tweet led to a barrage of abuse for Waters, so much so that within half an hour he'd deleted it and apologised.

However, as we know, apologies do not cancel the mob.  Both Plaid Cymru and the Liberal Democrats later piled in with their own howls of virtue signalling anguish.  A Plaid spokesperson said: "Lee Waters' tweet was highly inappropriate, ill-judged and thoughtless.  The murder of George Floyd and the subsequent trial is of worldwide significance and a potent reminder that so much more needs to be done to tackle structural and institutional racism - including here in Wales".  Such hand-wringing far left nonsense is worthy of Labour itself.
The Welsh Lib Dems added: "To make the comparison between the death of an individual at the hands of the police and his opinion of political coverage in Wales is both foolish and exceptionally poor judgment.  We're glad to see he's deleted his tweet".  The Lib Dems won one seat in the last Senedd election.
It's high time people in the spotlight stopped bowing down to the followers of the BLM cult and realised that beyond the establishment hardly anyone cares about BLM and/or criminals who have been killed thousands of miles away.  It's too late for Labour, but a party that opts out of kneeling before this unpleasant anti-British bunch of Marxist bullies is the party that will win over the working classes.
at April 22, 2021