A Labour frontbencher has come under fire from the woke brigade after she posted pictures of herself distributing leaflets that pledged to deal with 'traveller incursions'.  Charlotte Nichols posted the pictures to her Twitter account on Thursday.  She even included a close-up of the leaflet that paraded the 'controversial' pledge for all to see.
The leaflets were being distributed in the Orford ward of Warrington, where the whole council is up for re-election in May.  Nichols was elected MP for Warrington North in 2019 and is the Shadow Minister for Women and Equalities, an irony not lost on the cancel mob.
Among those taking part in the online onslaught were Jonathan Bartley - co-leader of the Green Party - Ash Sarkar and Nichols' Labour colleague Kim Johnson.  Ex-Labour MP and all-round loony lefty Chris Williamson dedicated a five-tweet Twitter thread to attacking Nichols. 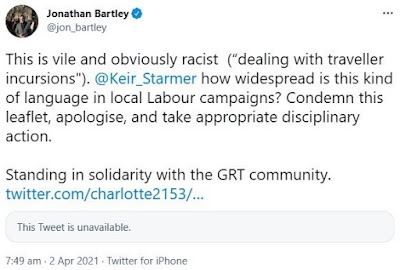 Following the backlash, one of the candidates named on the leaflet locked down his Twitter account.  Nichols deleted her tweet and issued a lengthy apology and said the remaining leaflets would be destroyed (see below). 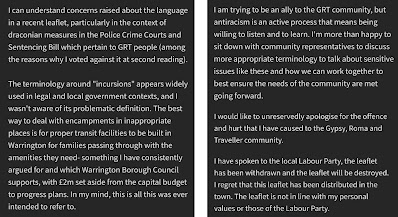 It's clear that those responsible for the leaflet thought that the language would play well with voters, otherwise they wouldn't have printed it.  Those on their far left high horses don't seem to realise that one of the key reasons they lost so heavily in 2019 is that they don't connect with voters.  By censoring and cancelling local Labour Party campaigns they are furthering that alienation between Labour and the working classes.
If they weren't complaining about the traveller pledge, these leftists would have been moaning about the Union flag graphic on the leaflet.
Keep it up morons!
at April 04, 2021