NAZI AND KLAN SLURS OF THE LEFT

Leftist uproar following the release of the race report last week was predictable.  The left thrive on division and need grand lurid conspiracies about institutional racism to sow it.
Nine of the ten commissioners who wrote the report were black and Asian, but that didn't stop the hysterical left from sending them some outrageous abuse their way.  Labour MP Clive Lewis responded to the report by tweeting a picture of a Klansman.  He added: "To be crystal clear this image represents structural racism".  OK, Clive, but if you're using the image to suggest that racism is actually rife in Britain why use a picture of a dead Klansman from Missouri?  Not the same country, dickhead. 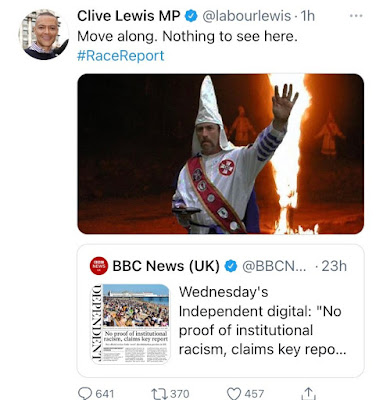 As if tweeting an image of a Klansman in response to a report co-written by five black people wasn't bad enough, Cambridge professor Priyamvada Gopal likened the chair of the Racial Disparities Commission to Joseph Goebbels.  Initially she questioned Dr Tony Sewell's credentials, but on being informed that his doctorate was genuine, she compared him to a senior Nazi. 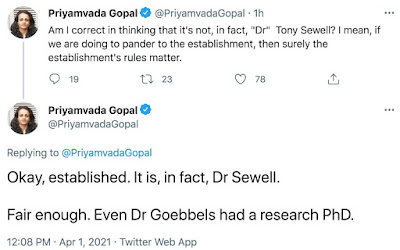 Gopal is a nasty piece of work, but remains in her university post despite a string of anti-white racist tweets including expressing a desire to 'knee-cap white men' and saying that 'white lives don't matter'.  She also remains at liberty to express such views on Twitter, a platform that has removed conservative voices for much less - including Bin The Labour Party.
Gopal's target this time was in actual fact a black man, but apparently the Nazi term fits all as long as it's someone who doesn't subscribe to your hard left views.
Below is the full line-up of the Racial Disparities Commission, including Dr Sewell (top left). 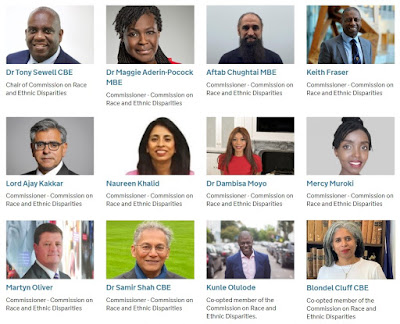 On Saturday the commissioners released a joint statement condemning the abuse they'd received following the report's release.  The tweet from Clive Lewis was referenced.

"The deeply personal attacks on many of us by politicians and other public figures are irresponsible and dangerous.  For example, one MP presented commissioners as members of the KKK. Robust debate we welcome.  But to depict us as racism deniers, slavery apologists or worse is unacceptable"

Let's be clear.  There is no better country on earth to be born if you are black.  The constant sniping from leftist agitators is aimed at dragging us all back into an age of racial strife and division.  It is no coincidence that BLM has its roots in Marxism.  Division is their game, destruction of society the aim.
at April 04, 2021