The socialist governments in Scotland and Wales have finally allowed hospitality venues to reopen - two weeks after England.  Nicola Sturgeon has gone one step further than Boris Johnson and Mark Drakeford, in that venues can open indoors, but only until 20:00 and no alcohol is allowed (another absurd rule in these absurd times).
One man, it seems, was allowed to sup a pint in Wales before the mere mortals (aka plebs).  Sir Squeaky was visiting a Wrexham brewery on Thursday and as part of his photo op poured himself a pint.  Welsh Tory leader Andrew RT Davies wasn't best pleased with the Labour leader's timing... 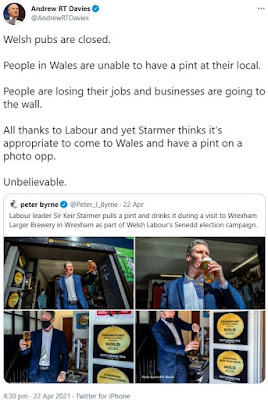