The British do not have an appetite for communism.  The various communist parties of the UK have never made an electoral impact and the Morning Star's circulation collapsed with the fall of the Berlin Wall.  And yet, despite being a front for the Communist Party of Britain (CPB), the paper was cock-a-hoop about the rise of Corbyn.  When he was elected as Labour leader the paper ran a Sunday edition for the first time in its history.  Corbyn himself has no problem letting people know his preferred news read, in fact Corbyn has no issues at all in attending the annual communist May Day gathering in London, albeit he will portray himself as a 'socialist' while Soviet flags flutter around him. 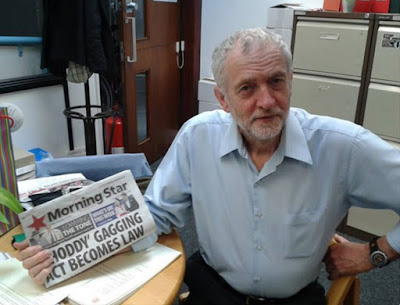 Socialism as an ideology is intrinsically linked to communism, in fact it was Marx himself who designated communism as a successor to socialism, while Lenin said that the 'goal of socialism is communism'.  However, because communism is linked to the deaths of millions of people around the world it has been tainted to say the least, and it's much more politically savvy to label oneself a 'socialist'.  However, scratch the surface and you will find reds are no longer under the bed, they are leading the current Labour Party.  John McDonnell, although he squirmed when asked about it by Andrew Marr, has admitted he is a Marxist.  Corbyn's followers are riddled with committed reds - Owen Jones makes no secret of his adoration of Marx and Ash Sarkar famously told Piers Morgan she was 'literally a communist'.

Little Owen, despite being a Marxist himself, is keen to avoid such labels being attached to the Labour leadership.  He had one of his trademark tantrums when he alleged the BBC digitally enhanced Corbyn's hat to make it appear 'more Soviet'.  The truth is that they didn't need to adjust his hat, take any picture of hatted Corbyn and put it next to one of Lenin and they're identical.  Beyond that one can also look to the various groups and movements that Corbyn has supported around the world.  Sinn Fein/IRA has its roots in Marxism, the ANC is aligned with the South African Communist Party and he continues to excuse the disastrous left-wing policies of Chavez and Maduro in Venezuela.  So perhaps it shouldn't have come as much of a surprise when Corbyn was linked to a Czech spy and dubbed 'Agent Cob'.

Whether or not the claims are true is rather irrelevant when one considers all his other known affiliations.  We already know Corbyn is a communist and a traitor, despite whatever baseless protestations come from his supporters.  And so the same can be said for Michael Foot, the last truly red leader of the Labour Party prior to Corbyn.  Foot has been the focus of similar claims for years and they resurfaced over the weekend.  Foot denied it to his grave and the left of Labour continue to feign outrage for the simple reason that it is not appealing to the electorate to have such ties out in the open.  But why should it surprise anyone were it true?  The Labour left are drawn to such causes, less so Foot, more so Corbyn.

In reality Corbyn is far and away to the left of Foot and that makes him all the more dangerous.  It's why we must not let his followers pull the wool over the eyes of the electorate with the romanticism of 'socialism'.  He will always align himself with enemies of this country, it is the habit of his lifetime.  Anything that undermines the capitalist West is fair game, whether it be communist or even Islamist.  Diane Abbott summed up this notion when she declared that 'Every defeat of the British state is a victory for all of us'.  She wasn't merely referring to the Labour Party when she said that, she meant the left, the proletariat, the hammer and sickle.
at September 17, 2018