ATTACK OF THE CORBYNISTAS

The faceless mob of Corbyn followers went into overdrive this week.  We've long joked that anyone who speaks ill of the Great Leader will face the wrath of the keyboard warriors, but it's not really a joke, as any high profile Corbyn critic can attest.  This week we've had two celebs fall foul of the Corbynistas.

First there was former EastEnders actress Tracy-Ann Oberman, reportedly driven to tears after she tweeted about Ewa Jasiewicz, a woman who sprayed pro-Palestinian graffiti on the last remaining wall of the Warsaw ghetto.  Jasiewicz has been invited to speak at a Momentum event taking place at the Labour conference.  Oberman was promptly inundated with abuse.

Within 48 hours it was the turn of Countdown presenter Rachel Riley.  She dared to share some links that were critical of the Great Leader.  Riley was mercilessly trolled by the Corbynistas who branded her "thick", despite the fact she is a maths genius and all-round science geek.  Just goes to show the sheer idiocy and fanaticism of Corbyn's followers, they just see red (no pun intended) when anyone dares to criticise the clown.

Incidentally, both women are Jewish.  That probably didn't help, as anyone who dares to speak out against Corbyn is instantly branded a Zionist, so two bona fide Jews must have been easy pickings.  We've actually seen this daftness on our Facebook page several times recently, where the Corbyn mob accuses us of being Zionists.  Check out the following two examples, one of which is an exchange of private messages and the other is a comment left on one of our posts (click images to enlarge) 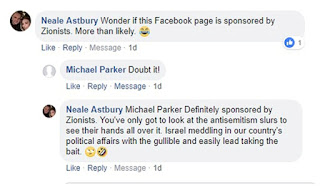 The zealotry is there for all to see.  They are so fanatical about Corbyn that they perceive any criticism as part of some grand conspiracy.  Only today we heard from the leader of the Public and Commercial Services Union that the anti-Semitism scandal engulfing Labour had been 'invented by Israel'.  They are so blinkered they just don't appear to comprehend that their opinions are anything other than bat-shit crazy.

Jewish people are terrified of any prospect of Corbyn entering Downing Street, this is a real tangible fear and it's justified.  There is no conspiracy, only a rabid anti-Jewish sentiment permeated through Corbyn's Labour Party and getting worse by the day.  If Corbyn ever managed to make his way into Downing Street as PM there would be an exodus of Jews from Britain.  Naturally many of them would make their way to Israel, a safe haven that many Corbynistas would dearly love to see destroyed.  Let that sink in, and then claim that the wretched stain on our politics that is Jeremy Corbyn is not anti-Semitic.
at September 14, 2018