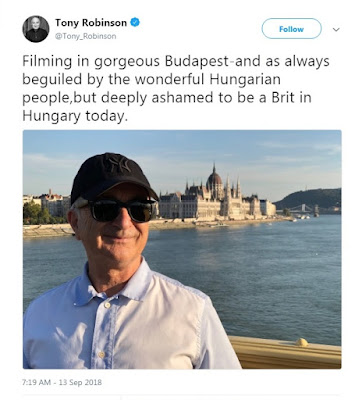 Former Labour NEC member, remoaner and all round tit Tony Robinson looking rather smug and happy with himself despite his "shame".  While at first it appears that Tony is embarrassed to be British because of Brexit, he later clarifies that his perceived shame is because British Tory MEPs just voted against imposing EU sanctions against Hungary.  Confused?  You might well be.

Apparently the Hungarian people are living under a tyrant and it should be our job (along with the other 26 EU member states) to impose sanctions against Hungary.  However, might we point out that this so-called tyrant - Viktor Orban - was re-elected by the people of Hungary by an overwhelming majority in April this year.  Orban's Fidesz party scored a whopping 49.3% of the national vote.  To put that into perspective, Tony Blair only achieved 43.2% in his 1997 landslide.

So, while Robinson appears to suggest that the Hungarian people are somehow not responsible for their "plight", the maths say otherwise.  And let's say, for instance, that Tony is suggesting that the Hungarians are crying out for a left wing alternative, presumably then the main opposition are socialists?  Nope.  The second largest party in Hungary is Jobbik, a nationalist party to the right of Orban!  One has to look to third place for the socialists, on a measly 11.9% compared to the combined 68.3% of the two right wing parties.

The EU has had it in for Hungary ever since it refused point blank to accept their migrant quotas (along with Poland and the Czech Republic).  Orban used this year's election as a referendum on migration and the people answered resoundingly.  There is little appetite for the floodgates to be opened up, as Hungarians can see the death and destruction that has been reaped on Western European countries by way of uncontrolled migration.  And so it goes there is little appetite for a left-wing party that would open said floodgates.

The Hungarians are largely happy with their lot and they don't need smug leftie British twits like Tony Robinson to lend them his sympathy, or shame.
at September 15, 2018