Ian Bone has lots of form.  His Wikipedia entry (yes, he is that famous) states that he studied politics at Swansea Uni before embarking on decades of 'anarchism'.  He is a co-founder of Class War and has been involved in setting up various other far left groups, publications and events including the Movement Against The Monarchy.

Somewhere along the way Bone has clearly made a few quid for himself, no doubt aided by his ironically titled biography 'Bash The Rich' available for the tidy sum of £9.99 on Amazon.  So perhaps it came as no great surprise when Bone was exposed as a resident of leafy South Norwood in Croydon.  According to Rightmove the average price of a flat in South Norwood is a staggering £270,454!  A semi-detached home here would likely set you back over half a million, so clearly Bone is doing well for his 'anarchist' self.

As middle class as they come, this Bone meme was shared 1,070 time on our Facebook page. 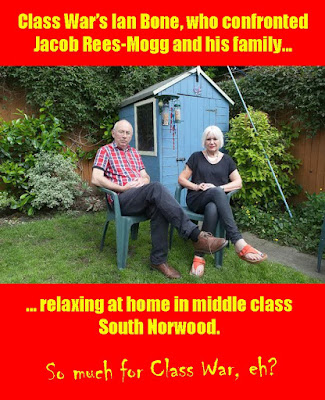