Corbyn loyalists are cock-a-hoop about this year's Labour conference, but they're very much alone.  Only the most blinkered leftists could fail to grasp what a laughable disaster it was.  Step up Little Owen...

The 'best speech' by a very poor public speaker is actually lame praise, but to claim the left is 'winning every argument' is hilarious.  The left, presumably led by Momentum, failed to achieve any clear cut victory on Brexit at the conference.  No clear policy has been adopted going forward, just more of the same ambiguous gerrymandering whereby Keir Starmer says one thing and his colleagues say various other things that contradict him while Corbyn is stuck somewhere in between apparently clueless as to what the 'policy' is.  The only thing that speakers agreed on was that any deal should be voted down in order to force (another) general election.  This is a miscalculation of foolish arrogance on Labour's part.  The public won't appreciate Brexit being frustrated domestically and will be even less enamoured by the prospect of yet another general election, particularly one which the opposition believes is a foregone conclusion.  Furthermore, this conference will have shown the public that the prospect of a Labour government is a nightmare scenario.

Every day of said conference exposed the crazed communists within.  There was the teaching assistant who announced that 'proper education' in schools would stop children becoming Tories.  There was Laura Smith (MP for Crewe and Nantwich) who called for a 'general strike' in order to force a general election.  There was the 'deep state' conspiracy theory propagated by Corbyn advisor Andrew Murray and his call for 'mass protests' if Labour didn't get its way.  Finally, there was the sea of Palestinian flags that greeted a speaker as he raged about Palestine, an issue that is of little, if any, concern to the many watching that display on their TV sets.  Such outlandish speeches connected with very few beyond the conference, except to announce that the Labour Party is totally unelectable and unfit to govern.

If the lunatics having got back inside the asylum was bad, to make matters worse the shadow cabinet appeared to contradict each other on a daily basis, and not just on Brexit.  Rebecca Long-Bailey was flummoxed on both Brexit and John McDonnell's 'shares for workers' policy.  Diane Abbott delivered a trademark numbers gaffe, Corbyn couldn't recall his six 'Brexit tests' on the beeb and running throughout the conference was the Corbyn versus Watson undercurrent. 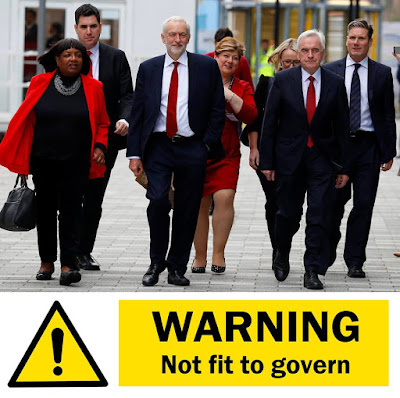 While Corbynistas routinely blame 'right wing news smears' for negative coverage, such was the lunacy on display in recent days that the left wing media has now joined the howls of disapproval.  Marina Hyde, one of Little Owen's fellow Guardian columnists, summed up proceedings as a hub of 'paranoia' and 'Momentum robots' awaiting the next 'Brexit split/foreign policy row/man-versus-machines infinity war'.  The Mirror bemoaned 'crackpot Labour loons'.

If the Guardian and the Mirror can describe the Labour Party in such terms then perhaps the revolution is lost before it can begin.  Labour are clearly unfit, divided, deluded and dangerous.
at September 26, 2018