The latest YouGov polling reveals that most people polled believe the Labour Party is more racist than the Conservatives.  The margin is just one percentage point, but when asked the same question regarding Jeremy Corbyn there is a nine point gap between himself and Theresa May.  When asked whether Labour is anti-Semitic there is a huge 21 point gap and this rises to 25 points when asked about Corbyn's own anti-Semitism. 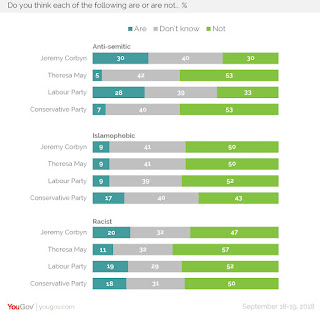 On the surface it does appear that the ongoing anti-Semitism scandal engulfing Labour has had a significant impact on public opinion.  For the full report click here.  It's not great reading for Labour activists, but that's what happens when you swing behind a Jew-hating Anglophobic Brit-bashing communist!
at September 25, 2018