How the UK politics cycle goes...

Labour make mouth watering promises including the creation of tens of thousands of tax funded jobs.  They'll tax those who work more and give it to people who work less.

People are given daft jobs such as Ocean Wave Assistant Head Counter, paid £30k/year from tax payers' money.  For the most part people are happy.  Joblessness decreases, things look promising.

A couple of years in and the Labour government is struggling to pay the wage bills.  Assets, such as our gold reserves, are sold off to foot the bill.


Soon the country is on its knees.  People are fed up of the crippled economy, the high taxes and benefit grabbers.  Labour refuses to cut the jobs they created, but struggle to come up with a solution to pay for them.  The reserves are empty.

The Conservative Party promises to make the necessary cuts to help the country recover.

The cuts are made and the unnecessary government funded jobs are axed.  The jobless are angry, unemployment goes up, but the country’s economy begins to recover.

The Tories are despised, for essentially taking away the freebies and handouts and also for allowing corporations to grow their money and provide real sustainable jobs.  They maybe the right decisions for the country, but the policies prove unpopular for the majority of the public.  The economy slowly continues to recover and growth occurs at a normal sustainable rate.

Labour promises quick fixes - government funded jobs for the unemployed, free student finance, free tuition and to take the money off the rich and give it back to the poor.

People can’t resist the pledges - Labour wins power.  And so on... 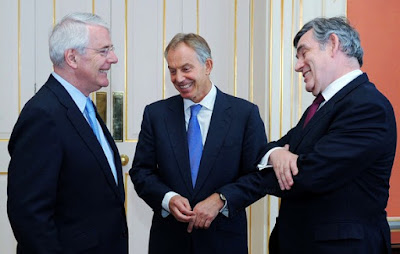