This meme was put together in the wake of Sad Khan's acceptance on the Andrew Marr Show of the so-called 'People's Vote'.  The big Remain lie that the 'People's Vote' is anything but a referendum re-run was exposed by Khan when he uttered that the 'option to stay in the EU' should be included on the ballot.  The snake waffled about not being a 'neverendum guy', but that is exactly what the 'People's Vote' is all about, and if he didn't get the answer he wanted a second time he would be demanding a third vote very soon.  Don't be fooled - we already had a 'People's Vote' - in 2016! 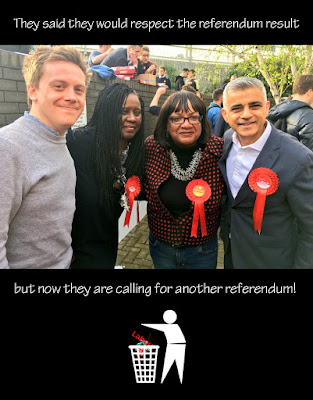