READY TO GOVERN, CAN'T PAY FOR A TAXI

Hot on the heels of a disastrous conference, Corbyn embarked on a mission to Brussels to get the low down on Brexit negotiations.  Presumably Jez told Michel Barnier that he planned to topple Theresa May before Christmas, or something along those lines.  Unfortunately the Great Leader was late for his meeting because his delegation didn't have any money for a taxi fare.

That's right folks, the same man who told his conference only yesterday that his party was "ready to govern", couldn't scrape together a few euros for a taxi ride.  The delegation included Keir Starmer (of course) and his closest advisor Seumas Milne.  In the video posted by The Sun, one of Corbyn's aides pleads for euros, after which Milne can be heard muttering off camera "there's no end of problems". 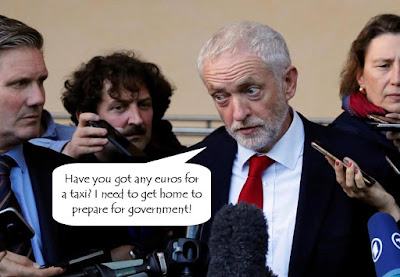