AMAZON TO TAKE DOWN PARLER

The latest move in the sinister war on free speech could see Parler disappear altogether on Sunday.  Following its removal from the app stores of Google and Apple, the site will now potentially be shut down via Amazon.  It seems that the free speech app that became home to millions fleeing the tyranny of the left-wing tech monopoly is itself ultimately reliant on the tech monopoly.  Parler CEO John Matze warned that Amazon's decision to shut down its servers could leave the site offline temporarily 'for up to a week'. 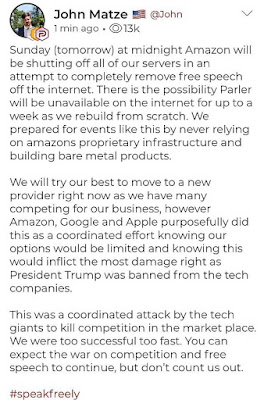 There is simply no doubt that the events of the last few days is a co-ordinated attempt to silence conservative voices - beginning with the Facebook/Instagram ban of President Trump, followed by the complete removal of his Twitter account (and a number of his prominent supporters) and then an almost simultaneously all-out assault on Parler beginning with Google, followed by Apple and now Amazon.
Let's see those names again, and I implore anyone to say this was not a co-ordinated attack on free speech...
Facebook/Instagram
Twitter
Google
Apple
Amazon
This is tech tyranny.  Yesterday, when we tried to post a link to Parler on Facebook, the following sinister warning popped up informing us that 'pages and website that repeatedly publish or share false news will see their overall distribution reduced and restricted'.  Our distribution has already been heavily restricted.  Despite having over 110,000 followers, we barely reach a fraction of them and our following has stagnated for around six months.  This is called 'shadow banning' and because we are not politically aligned with the woke agenda we are already being suppressed. 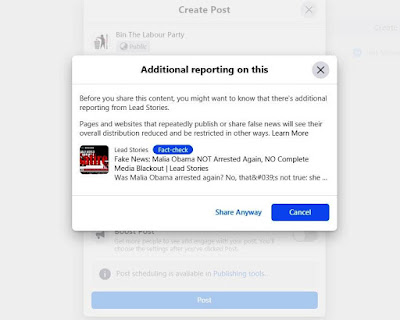 The link we were trying to share was to the Parler app and nothing to do with a story about Malia Obama.
We expect BTLP to be completely removed from Facebook at some point in the near future, although we will try and safeguard the main page by continuing to operate primarily from the back-up page.  Please follow us there, but also on YouTube and Parler if you can.  We are also reliant on the tech monopoly and can also be disappeared relatively quickly.  See links below...
Facebook back up page
YouTube channel
Subscribe to Parler (before it's taken down) - our user name is Binlabour
Donate to help us fight left-wing tyranny
at January 10, 2021