THE DEMONISING OF SWAYNE 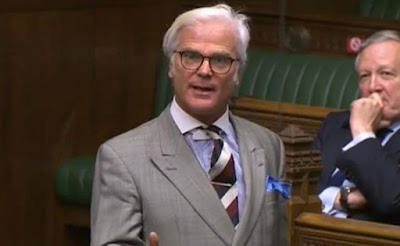 When Tory lockdown sceptic Desmond Swayne says that coronavirus figures have been manipulated, he is stating a fact that even lockdown enthusiasts cannot deny.  100,000 people have not died from coronavirus in the UK - they have died within 28 days of a positive test.  This is not the same thing.
Go to the official coronavirus dashboard or listen out next time they read out the daily figures on the news.  The 28 days disclaimer is an indisputable fact that cannot be avoided.
Of course this is not to say that tens of thousands of unfortunate Britons haven't died from the virus, but how many of those 100,000 died of natural causes, of strokes and flu, accidents, suicides, heart attacks?  Perhaps we'll never know, but the 100,000 figure is a demonstrable lie.  The trouble is that despite the presence of the disclaimer, the media's repeated headline reference to the death 'milestone' has embedded itself in the minds of gullible viewers.  Once again, fiction is triumphing over fact.
This week an interview came to light in which Sir Desmond spoke with a representative of Save Our Rights UK, an anti-lockdown group formed last year.  The interview took place in November and can be seen in full on their website.  He makes numerous astute observations and repeats views that he has quite often made in the Commons.  However, on this occasion the full might of the lockdown machine has come down on him simultaneously.
From self-appointed Labour attack dog Angela Rayner to the mainstream media and even his own party colleagues - Swayne is being bombarded with calls to apologise.  For what?  Having an opinion that is critical of lockdown?  If this is what it has come to then we truly are no longer living in a democracy.
The media has picked out three key points from his interview for particular attention.  Firstly, that coronavirus statistics are being manipulated.  The irony is that this is coming from the same broadcasters that add the 28 days disclaimer themselves.  Secondly, that the risk to the NHS is manageable and hospitals were running at normal capacity.  Again, the irony is that even the BBC themselves have used NHS statistics to show that critical care occupancy is not just 'normal', but it's actually quieter than the corresponding period in the pre-pandemic winter of 2019-20.  The key point to remember is that even at the height of panic over hospitals being 'overwhelmed', the Nightingales were not reactivated.
An article we posted earlier this month dealt with the issue of hospital scaremongering falsehoods.
The BBC, ITV, Sky and co didn't try to argue these points, but they had a counter-argument for a third statement in which Sir Desmond claimed that deaths were at the 'typical level' for the time of year.  As the interview was filmed in November, they looked back at the ONS stats for November which showed there were over 6,000 excess deaths in England and Wales for November when compared against the five year average.  However, it's unclear at which point in November the interview was filmed and worth noting that excess deaths for the previous month were less than 3,000 and a marginal 126 more than in October 2019.
However, the headlines revolving around Desmond Swayne's interview deliberately and insidiously conflate lockdown scepticism with Covid denial and anti-vaxx theory.  The interview provided the smoking gun they required to tar him with that brush, something which they'd dearly wish to ascribe all lockdown sceptics.  For it wasn't necessarily because of anything he said, but because of the company in which he said it.
Save Our Rights UK is a group that organised many anti-lockdown protests last year, although it has nothing to do with Jeremy Corbyn's barmy brother Piers.  While there is little, if any, anti-vaxx material on their website, the media have designated them anti-vaxxers.  They have done this in order to tar Desmond Swayne by association.  This is sinister McCarthyism.
Labour's Angela Rayner has jumped on the bandwagon, tweeting incessantly over the last few days calling for Swayne's head.  For the second time this month she has written to the chair of the Conservative Party calling for action against one of their elected members.  Earlier this month she called for Andrew RT Davies to be suspended over a tweet in which he criticised Remain politicans.
In her official complaint about Sir Desmond she states that there is 'absolutely no evidence' to back up his claim about official figures having been manipulated.  What part of  'deaths within 28 days of a positive test' doesn't she grasp? 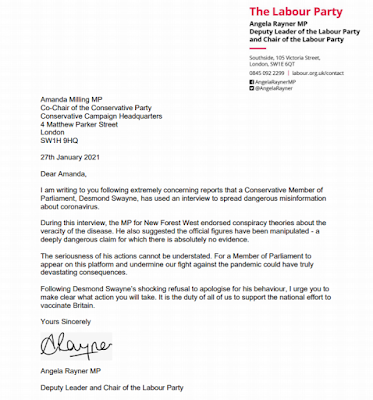 Appearing on Sky News, Rayner went much further than her letter and suggests that Swayne had undermined the vaccine programme, despite the fact he has never once questioned the veracity of any vaccine.  His beef has always been with the devastating restrictions on life and liberty.
While Boris Johnson himself has not yet been drawn in, senior figures around him have called on Swayne to retract his comments, including Michael Gove and Priti Patel. However, this demand is asking much more than just a mere apology of Sir Desmond, it is silencing his right to express an opinion.  This astonishing attitude from so-called 'conservatives' is what has turned our society into a sinister dystopia where only one train of thought is allowed to prevail and all dissent must be smeared and crushed - in the back of a police van if necessary.
As Sir Desmond quite rightly points out himself, if action is taken against him it will be 'punishment for thought crime'.  Thankfully, he is made of stern stuff and appears willing to be hung out to dry as a martyr to the sceptic cause if it comes to that.  Regardless of what happens to him in the coming days, history will judge Desmond Swayne to be a man of honour, principle and a true conservative.
at January 29, 2021