When Trump supporters stormed the Capitol there were howls of condemnation from Twitter users denouncing the attack on democracy.  Nothing wrong with that per se, except many of those individuals were severely tainted by having spent four years trying to overturn the Leave mandate of 2016.  Leading Remainers such as Keir Starmer and Caroline Lucas tweeted in defence of democracy, but with no sense of irony on their part... 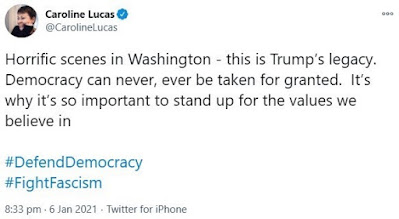 Both of these tweets sparked a huge response from Brexiteers pointing out their shocking hypocrisy.  Two Conservative politicians were among those making such points.  Susan Hall, leader of the Tory group on the London Assembly, took exception to Caroline Lucas. 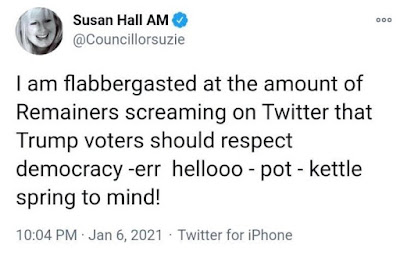 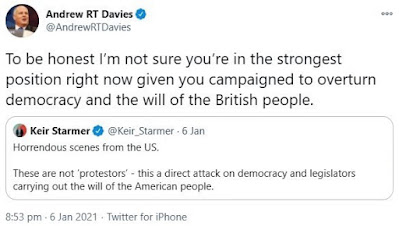 These fairly innocuous tweets by Hall and Davies provoked a furious response from Labour Remainers, including Chris Bryant, Mark Drakeford, Dave Lammy and Angela Rayner.  Both Bryant and Rayner complained directly to Amanda Milling, the chair of the Conservative Party.  Bryant demanded that Davies be suspended and barred from standing in the next Senedd elections (see letter below). 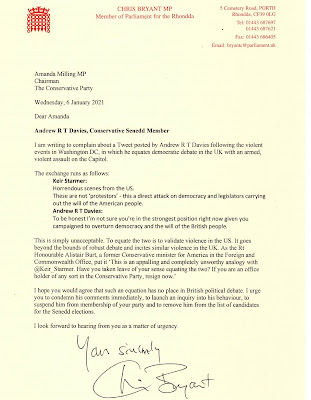 However, it was Rayner's letter that really caught our attention.  She also demanded that both Hall and Davies be suspended and prevented from standing in future elections (see below). 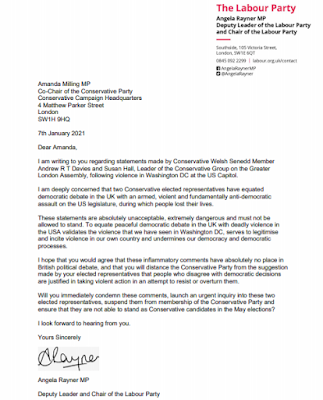 Sharing her letter on Twitter, Rayner referred to the comments as 'unacceptable and dangerous'.  It's also interesting to note that she states that the comments were 'inflammatory' and 'have no place in British political debate'.
Click below for footage of Angela Rayner calling a Tory opponent 'scum' in the House of Commons.  This happened just three months ago.
To coin Susan Hall's phrase - 'pot, kettle, black'.
at January 10, 2021