Labour frontbencher Catherine West tweeted in July 2020 that the UK government's decision to opt out of the EU vaccine scheme was 'dumber and dumber'.  Needless to say, the tweet hasn't aged well. 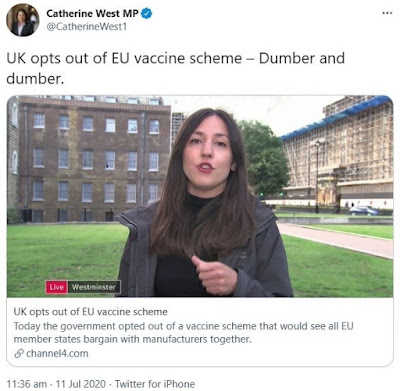 If Britain was committed to the EU-wide procurement scheme, the mass vaccination currently taking place across the UK would not be happening.  In some EU countries the shortage of jabs has led to a suspension in their vaccination programmes, while Hungary has turned its back on the scheme and is looking to China and Russia for Covid vaccines.  The Czech Republic is also looking at the Russian vaccine.
Meanwhile, in response to the British vaccine coup, the EU responded in extraordinarily petulant fashion by threatening to impose border controls at the UK border with Ireland.  The decision to trigger Article 16 was quickly rescinded, but the damage was already done.  Having threatened to take the British government to court over the Internal Market Bill last year for pretty much the same reason, it was an act of rank hypocrisy and aggression.  Even arch Remainer Tony Blair criticised the move, saying it was 'very foolish'.  Indeed.
Needless to say, Catherine West is staying very quiet about the EU vaccine crisis - despite her role as Shadow Minister for Europe.  What an embarrassment.
at January 31, 2021