Remember when American cities went up in flames for months on end last year?  Remember all the looting and the thousands of businesses that were torched and vandalised?  Remember the toppling of statues and attacks against sacred sites including war memorials and churches?  Remember the occupation of Capitol Hill in Seattle - in which Marxists ejected the police and declared an 'autonomous zone' for several weeks?  Remember the two people killed there and countless other violent deaths across the country (a death toll put variously somewhere between 19 and 25)?
Finally, can you recall how the mass media - on both sides of the Atlantic - referred to all this violence and chaos as 'peaceful protests'?  In fact if you type George Floyd into an internet search engine now you will be prompted by the word 'protests', but never 'riots'.
Following yesterday's shocking scenes at the Capitol in Washington DC we can now see the stark contrast between how the establishment wants you to perceive events.  They spent months absurdly declaring that the George Floyd riots were 'peaceful protests', but the moment those Trump supporters broke into the Capitol it was immediately declared a riot by broadcasters around the world.
Was the Capitol torched?  Was the place trashed?  Looking at various news sources the images suggest that once inside Trump supporters merely wondered around the building posing for photos, including one individual with his feet up on the Speaker's desk.  A female protester was shot dead by security personnel and three others died in 'medical emergencies', although there are no further details yet on what actually happened. 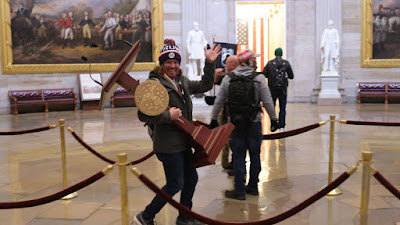 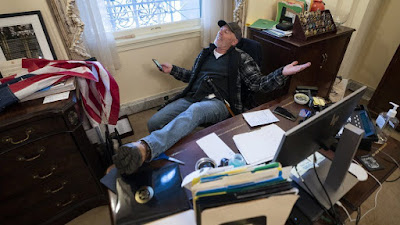 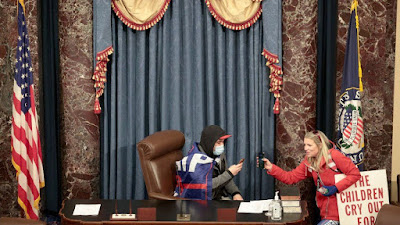 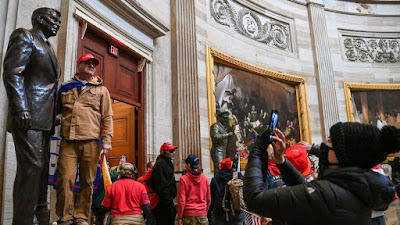 Imagine what would have happened if this was actually a couple of hundred BLM Marxists rampaging through the building?  They would have daubed graffiti everywhere, smashed anything and everything they could lay their hands on, attacked the police and set the place on fire.  We know that from everything we saw in 2020 - nothing is sacred.  After all, their leaders have repeatedly stated that they want to 'burn everything down' and replace it with their own twisted society.
If you want a prime example of how the media bends over itself to portray a certain narrative, there is one photo from the Capitol that is currently being beamed around the world.  It is not a violent image, but merely that of a man carrying a flag.  However, this flag represents something sinister and evil in the eyes of the liberal and leftist elites running this show.  When the Trump supporters were scaling the steps into the building it was a sea of red, white and blue American flags, but the media have decided to run with the one guy carrying a Confederate battle flag.  To the establishment this flag is the epitome of evil.  It cannot even be sold on eBay or Amazon, putting it on the same pedestal as symbols of Nazism.

During last year's riots many symbols of the Confederacy were destroyed and others were removed or renamed.  The last US state that bore the battle flag - Mississippi - finally scrapped it after years of pressure.  This historical revisionism, demonisation and destruction of an entire culture is deeply disturbing, but it is being encouraged by the mainstream media.  When they use the image of the man with the battle flag marching through the Capitol, it is entrench their narrative that Trump supporters are knuckle-dragging redneck racists.
It is this persistent derogatory attitude towards the working classes that created the conditions for Trump's surprise victory in the first place - and his colossal vote in 2020.  They don't like to report it, but Donald Trump received more than 11 million more votes than he did in 2016, and while Joe Biden smashed the record for the most votes ever received by any candidate, Trump's vote was the second highest number of votes ever received by a presidential candidate (yes, he even received more votes than their beloved Barack Obama).
Two weeks ago the BBC published a report on its website about the official presidential Twitter account.  The report bragged that Trump's personal Twitter account had lost several hundred thousand followers since the election while Joe Biden's had gained several million.  However, while the report gave details of Biden's 21.7 million Twitter following, it failed to declare the number of followers on Trump's account.  The reason is clear - Trump's following stands at more than 88 million, eclipsing that of his successor.
The media is selective and it is skewed.  Proof in point - all of the above.
at January 07, 2021