ARE HOSPITALS FULL OR NOT?

One of the greatest mysteries of the coronavirus pandemic is the truth about hospital capacity.  Cameras are seldom allowed in, but we are repeatedly told by media and politicians that they are at 'tipping point', on the verge of being overwhelmed and facing imminent disaster.  The problem is, they have been saying this throughout the winter and disaster has thus far been averted.  Furthermore, if such a doomsday scenario was imminent they would activated the multi-million pound Nightingale hospitals, but they mostly lie empty, collecting dust.  A little known fact is that only two of them ever received any patients at all during the pandemic.
While no-one here is suggesting that hospitals are empty and the virus doesn't exist, the authorities do nothing but throw fuel on the conspiracy fire with their knee-jerk hysterical reaction to anyone who seeks answers.  The rather unpleasant lady who wondered around Gloucester Royal Hospital filming empty corridors could have easily been ignored or debunked, but instead she was dragged out of bed and arrested the following day.  And for what heinous crime?  Curiosity?
This extreme response only serves to strengthen mistrust.
What also doesn't help is the very strange and somewhat inappropriate phenomenon of dancing nurses.  While we are all subjected to a daily barrage of scaremongering headlines about 'overwhelmed' hospitals and deaths by the thousand, on social media we are simultaneously exposed to hospital staff prancing around in TikTok videos.  It's fair to say that if you've recently lost relatives and loved ones, or they are currently on ventilators fighting for their lives - or if you are one of the thousands who have had treatment for serious illnesses cancelled or postponed - these performance videos are tasteless at best.
The dancing nurse phenomenon was dissected by conservative commentator Lauren Southern on her YouTube channel recently (click below for video).
One comment on this video summed up dancing nurses perfectly: "Imagine if truck drivers and farmers were doing TikTok dance videos while people were starving from food shortages".  Indeed.
It's almost as if we're being trolled.
Meanwhile, actual NHS statistics show that hospital capacity this winter overall is less than last winter.  That's a staggering revelation for a country in the grip of a deadly pandemic.  The first to expose these figures was the Daily Mail in several articles published in the last couple of months, including this one from December 18.  But it's not just the wicked right-wing Daily Mail that has been disclosing this NHS data.  The BBC has also released some interesting graphics using the same data, albeit not via their nightly fearmongering news bulletins.
On December 2 the Beeb published an article on its website entitled: Does the NHS really need protecting?  This included the following graphic (note the source: NHS England). 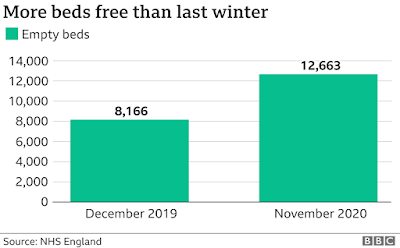 On December 28 the Beeb published an article on its website entitled: Concern at 'unprecedented' infection level in England.  This included the following graphic, showing hospital admissions over a three month period for each UK region.  The source in this case was the UK government.  This data reveals that exponential growth in hospital admissions was limited to London, the south-east and the east of England.  Everywhere else showed a peak in admissions around October and November, but were now either in decline, flattening or increasing slightly. 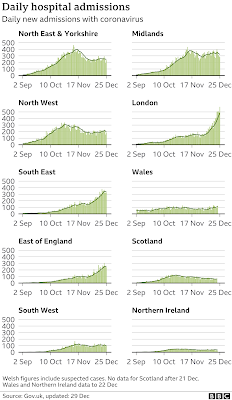 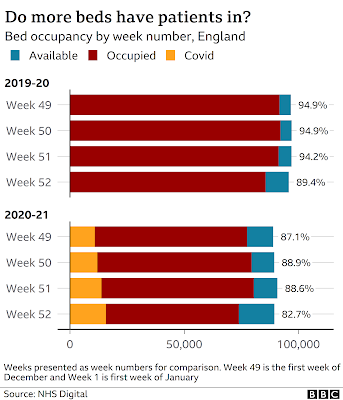 What this shows is that despite all the lurid headlines and warnings from politicians, not all hospitals are at breaking point.  So why repeatedly say that they are?  To perpetuate fear, nothing else.
A people who live in constant fear are much easier to control.