Remainers are still trying to convince themselves that every single ill that befalls post-Brexit Britain is down to our departure from the EU.  Some will even outright lie about it, including Labour frontbencher Rosena Allin-Khan.
On Sunday morning Allin-Khan tweeted a short clip of Andrew Marr interviewing the PM in which the presenter says there are no issues on petrol forecourts across the EU.  Of course there isn't, because mainstream media on the continent hasn't encouraged moronic behaviour on the forecourts.  Allin-Khan says there are no 'petrol shortages' in the EU, implying that are petrol shortages here - which there isn't.  What happened in the UK over the last week was a supply and demand issue sparked by irresponsible media reporting and a lack of common sense among the British public.  There is - and never was - a shortage of petrol in the UK.
Ironically, one of the only areas still thought to be affected by supply issues is the metropolitan Remain heartland of London.  It's almost as if self-centered middle class remoaners have bled the pumps dry and created the very problem they now blame on Brexit. 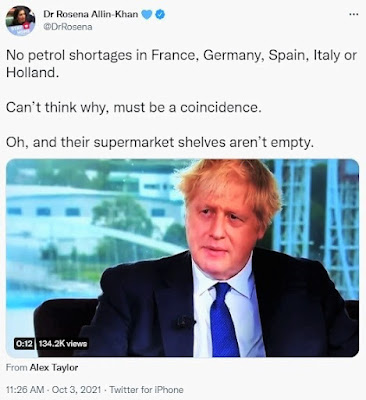 There also seems to be some disparity between what Remainers are describing in supermarkets and the situation north of Watford.  Allin-Khan suggests that supermarket shelves are empty here, which is not what most British people find when they do their grocery shop.  Her assertion that supermarket shelves 'aren't empty' in Europe is also a downright fib.
Photos of empty shelves in Brussels went viral last week and France is also experiencing shortages.  There are also shortages of lorry drivers across many EU countries, including Poland, Germany and Ireland. 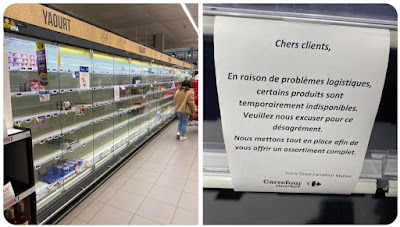 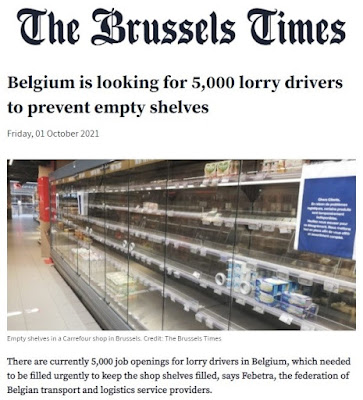 Remainers want to paint a very selective picture from their metropolitan bunkers.
at October 03, 2021