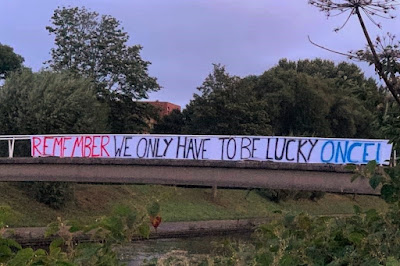 This was the sick banner hung on a canal bridge in Manchester over the weekend as Conservatives gathered for their party conference.  The banner references the IRA statement released following the Brighton bombing in 1984, an attack that killed five people attending the Tory party conference.
For previous Tory conferences in Manchester effigies were hung from bridges beneath banners reading 'Hang the Tories' and '130,000 killed under Tory rule, time to level the playing field'.  A red flag was painted on one banner, not that the political motivation of the culprits was in any doubt.  Red flags were very much on display on Sunday as several far left groups protested outside the conference. 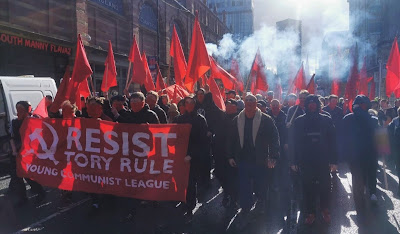 The Young Communist League is the youth wing of the Communist Party of Britain, one of whose slogans is laughably 'peace and socialism'.  With their faces covered behind a resistance banner, they looked anything but peaceful.
Other groups protesting included the youth wing of the Green Party and various anti-Brexit balloon heads including Drunk Steve and Femi Izawally.
On day two of the conference two prominent Tories were confronted in the street by people shouting 'Tory scum', echoing the words of Angela Rayner during the Labour conference.  Jacob Rees-Mogg was pursued and surrounded by several individuals, including one waving an EU flag and one waving an Irish tricolour.  In a separate incident Iain Duncan Smith was pursued by a group, one of whom is alleged to have swung a traffic cone at his head.  Five people have been arrested in connection with the latter incident.
There are still two days of the conference left.
at October 04, 2021