As the clock ticks down to her sentencing hearing, Claudia Webbe continues to spout race baiting nonsense.  Since the guilty verdict was handed down, the Leicester MP has lashed out at various detractors on Twitter, accusing them of racism and 'white privilege'.  We are not aware of any racial connotations to being likened to a fictitious alien race from the Star Trek universe, but Claudia appears to have found this tweet troubling enough to comment. 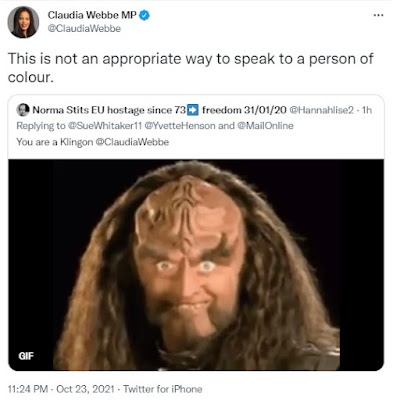 The following day Claudia took umbrage at a tweet from a Labour colleague.  Rob Marchant is a Blairite blogger who had suggested that a period of silent reflection would be advisable following her conviction.  Claudia responded by accusing him of 'white privilege'.

This followed an earlier tweet in which she declared that the absence of the racially charged term from school lessons was in itself a form of white privilege.  Blimey.

Then there was this stunner about 'undocumented workers'.

Claudia, undocumented workers are illegal immigrants.  That's why they're undocumented and wish to remain so.  This is so lame, one has to wonder how on earth she got the nod for a Parliamentary seat in the first place.  If Webbe is symptomatic of the level of intelligence on the Corbynista left then perhaps it will be a while before they darken the doors of power again.
One attribute that Webbe definitely shares with her hard left comrades is her obsession with race.  According to the Daily Mail she pulled the race card before the harassment verdict was even announced.  She reportedly sent a message to her supporters that read:  "I am a black woman in a white court, facing a white system and white prosecutors.  I have been deliberately targeted because I am vulnerable.  I know first-hand the sexism and racism institutions and media use to vilify black women".
Imagine having harassed and vilified a woman (who for all we know is also a woman of colour) for eighteen months only to paint yourself as the victim.
at October 28, 2021